General Patton’s troops at Roy’s Cafe?  Well not exactly… Many people that live in the Mojave Desert drive portions of old Route 66 through Amboy, California en route to Laughlin or Las Vegas, Nevada. Most Mojave Desert residents have heard the legends about General Patton training his troops in the desert during World War II. Many of these training areas were near Route 66 in California.

At the time the War Department realized the absolute necessity that troops would have to be well trained under harsh conditions to withstand the rigors of battle over rough terrain and in inhospitable climates. Thus, the Desert Training Center, California-Arizona Maneuver Area (DTC-CAMA) was created in 1942.  This was the largest training ground in the history of the military.  To learn more about the DTC-CAMA check the following website. It has a lot of information as well as directions to the museum located 30 miles east of Indio California on Interstate 10.

Back to the story of General Patton and Amboy.  To the east of Amboy are the remains of many of these WWII training camps. Some were rather large camps and others were small.  Seventeen miles east of Amboy are the remains of one of those training camps; it is one of the smaller ones.  In all of my research I could not find a definitive name for this camp, but it may have been a branch of Camp Essex.  There is a pullout and kiosk that marks this site today. It was also a rest stop during Route 66’s heyday.  Most of the remains of this camp are in the form of rocks laid out in squares and rows, most likely to mark pathways and decorate around tents. These rocks have laid out in this manner mostly undisturbed for over fifty years. This site is relatively close to the road but you must still be careful to watch out for snakes, and of course, always be sure to have plenty of water.  The accompanying pictures match the numbers on the overview placemarks. If you would like the original Google Earth .kmz file with coordinates, contact me and I will email it to you.  Look closely at the details in the pictures.

I hope you enjoy this tour of one of General Patton’s smaller camps.  To answer the question as to whether General Patton ever visited Roy’s Cafe – no one can be sure of that. I am sure though, that there are still stories circulating the desert on the subject, just waiting to be heard. 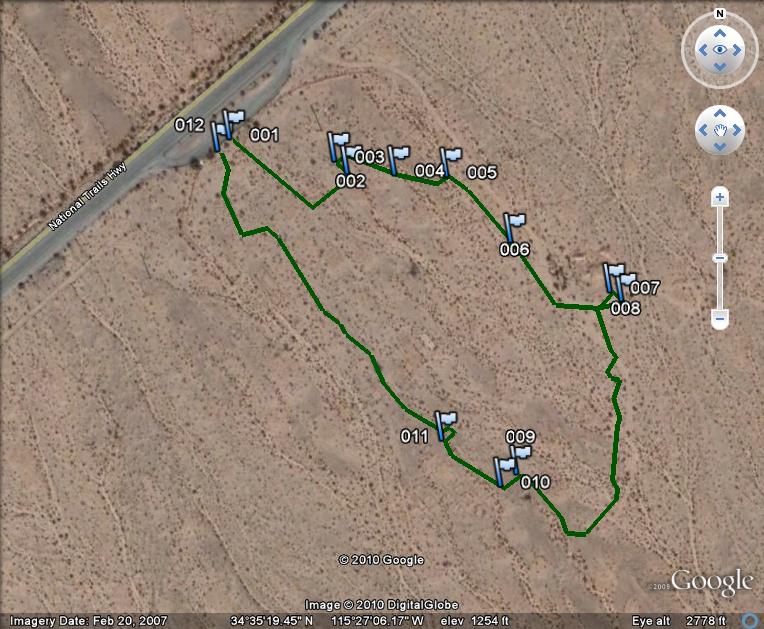