Exploring the west side of the Salton Sea &
Palm Wash in Anza-Borrego Desert State Park
By L. Bremner
https://www.desertusa.com 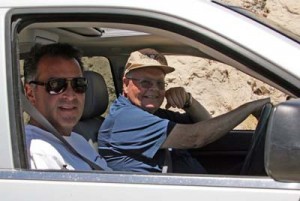 Jim and Tony in the Jeep.

I was traveling with some friends.  We planned to check out Salton City, and then head over to Anza-Borrego Desert State Park afterwards.  What we didn’t plan for was the wind.  It was blowing hard, and as soon as I opened my car door, the wind pulled the handle out of my hand and slammed it into the car next to us.  What a way to start our adventure.  After talking to the car’s owner and agreeing together that there was no permanent damage, we began our exploration. 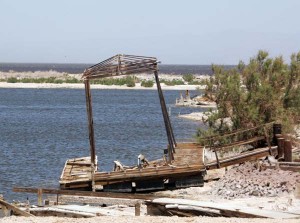 A dilapidated dock at Salton City.

Salton City was founded in the late 1950’s as a planned community.  A developer had established the roads, sewer lines, power lines and water mains.  It was to be a resort community filled with pools, beaches, a yacht club and a golf course. Many lots were sold, but most were never built on.  The fluctuating sea level and dubious water quality were the main factors contributing to the lack of development.

Today you can drive down the streets and see the power lines leading up to each of the empty lots.  There is a very small population living there, in trailers and custom homes.  The rising water level destroyed buildings, houses and trailers that were located along the shores and inlets, and many docks lie in ruin.  Beyond the scene of broken dreams, the sea sparkles and birds fly overhead.  It is a beautiful place and it could look nice once again, if the debris from abandoned buildings and vehicles was removed.  It’s easy to see what the Salton Sea development’s vision could have been, but I guess it just wasn’t meant to be.

Our next stop was the Calcite Mine 4WD Trail, located along S22, near the big microwave tower at the east end of Anza-Borrego Desert State Park.  It was empty, and no wonder, as a sandstorm and brutal wind were making it almost intolerable. 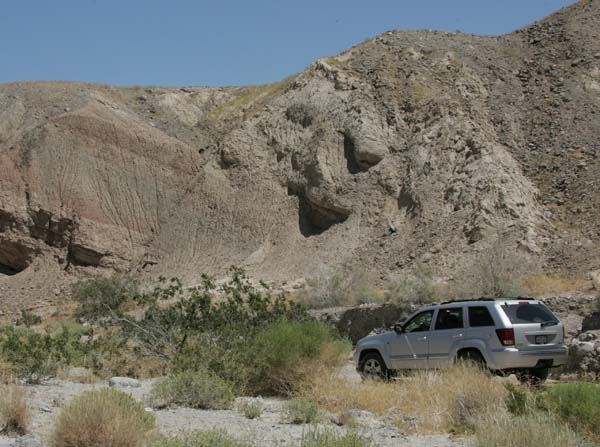 Our journey through Palm Wash and the Calcite Mine Trail.

Once the trail descended into Palm Wash, thankfully, the wind was no longer a factor.  The track was narrow and rough in parts, but our Grand Cherokee Jeep made the trip easily. The walls of the wash were made of mud and rose high above us.  The protected wash was very quiet, and had a feeling of stillness about it.  You couldn’t hear the wind or any nearby traffic from the S22.  There were a few scattered wildflowers and a lot of geological formations to view along the way.  I even found a rock that looked like a Buddha face.  Not everyone saw it, but it jumped right out at me. It is included in the gallery below. 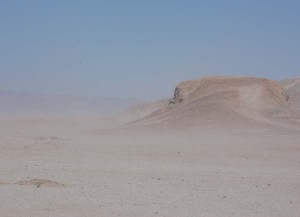 The wash opened up, and no longer protected by canyon walls, we ran into another sandstorm.  We decided to drive out of the wash and to return to the S22.  The GPS came in handy as there were many OHV trails in the area and we wanted to find a more established road out of there.

The wind really did make this a difficult trip.  It kept us in the car more than we would have liked. We decided to call it a day and parted ways with Dad.  He had a two-hour drive back to San Diego, and we headed back on Highway 86, north towards Coachella.

On the way home we passed a few more Salton Sea communities and decided to explore one called Desert Shores.  It was here that we discovered Salton City Beach.   As we drove up, I saw a couple of picnic benches in the white sand near the shoreline.  It reminded me of that popular print of two beach chairs facing a deep blue ocean.  The view from this beach made me feel like I did when I looked at that print … serene. There were some cute little beach shacks with palm frond roofs.  It all added to the tranquil scene.

Something about that beach really captured my attention.  It was so peaceful there.  There was no wind, and the sea was almost glassy.  The mountains behind Desert Shores created shelter from the elements.  It was quiet and sunny, and the sand was so white.  It really was a beautiful place. 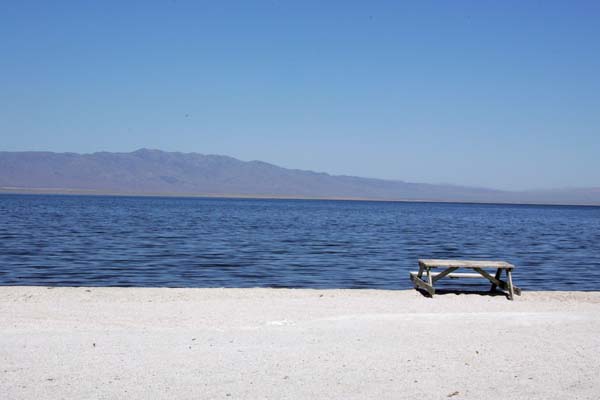 The view at Salton Sea Beach.

In the parking area near the beach, there was a little store/restaurant with a north-facing deck overlooking what used to be a marina.  The deck now overlooks an inlet with dark colored water, not really a pleasant view from that direction. My eyes went back to the beach.  What an amazing view.  Too bad they didn’t have a patio facing east, towards the blue waters of the Salton Sea.  There were some RV hook ups near the beach shacks that were campsites. We didn’t have time to inquire about the fees, or how many visitors they received each year.  I’ll get those details next time I pass through. 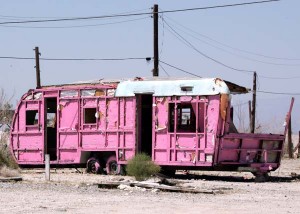 The pink trailer we encountered in Desert Shores.

We left the beach and drove down a few of the streets.  Many of the roads led us towards the water. Fingers of land created waterfront lots, and docks that once housed boats were all empty and tipping over.  Not much was left that could be used, or that anyone would want to use.  We came across an old pink trailer and I wondered who once lived there.  Abandoned shacks and trailers filled the community, but there were some nice homes too.  There were, however, a lot of “For Sale” signs.  Both communities we visited seemed like ghost towns. We didn’t see anyone walking around the neighborhoods, and there were very few cars.

We left Desert Shores and the Salton Sea with a lot of questions.  Who lived in these small communities; what were their stories?  I’ll have to plan another trip there to spend some time on the deserted beach, and to talk to some of the locals. 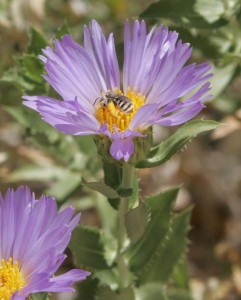 Mojave Aster were in bloom in Palm Wash.

Our journey through Palm Wash and the Calcite Mine Trail.

The view at Salton Sea Beach.

The pink trailer we encountered in Desert Shores.

An abandonded shack at Desert Shores.

Gulls flying over the Salton Sea.

A dilapidated dock at Salton City.

A house at Salton City.

Calcite Mine marker at the trailhead of Palm Wash.

The landscape of Palm Wash.

The mud walls above Palm Wash.

Tiny purple wildflowers were growing in the sandy areas of Palm Wash.

Jim and Tony in the Jeep.

Mojave Aster were in bloom in Palm Wash.

Can you see a buddha face on the red river rock?

The beach shack that covered a picnic table at a campsite on Salton Sea Beach.

A view of the mountains from Desert Shores.