In late May of 2009,  I spent an afternoon driving along the eastern side of the Salton Sea and south to Niland, CA home of Slab City and the infamous Salvation Mountain.

Since this road trip article is longer than most, I’ve divided it  into three separate posts for easier reading.  The Salton Sea was my first stop during my most recent road trip, so let me begin there.

The Salton Sea is an inland saline lake in the Sonoran Desert of extreme southeastern California. It occupies the Salton Basin, a remnant of prehistoric Lake Cahuilla. It is flanked on the south by the rich agricultural areas of the Imperial Valley and on the west, by Anza-Borrego Desert State Park. Both the Salton Sea State Recreation Area and the Salton Sea National Wildlife Refuge are located on its shores. 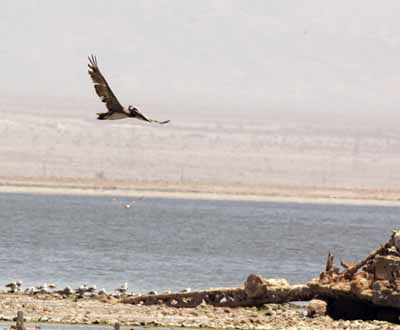 Less than an hour from Indio, CA lies the Salton Sea.  Once a recreation mecca for desert snowbirds, the Salton Sea is a far cry from the vacation spot it used to be.  Due to high salt levels fewer fish are able to reproduce, so they are dying off.  The day I visited the Salton Sea the temperature was about 103 degrees.  The smell was not bad at all.  The campground and Visitor’s Center were empty.  It was the end of May, so I didn’t really expect any crowds. 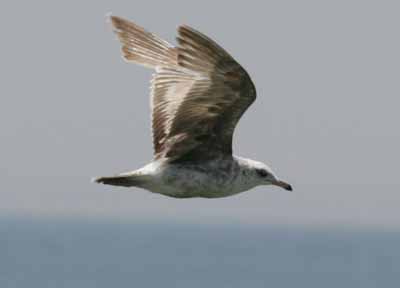 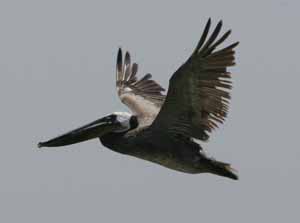 A brown Pelican at the Salton Sea.

My first stop was the Salton Sea Visitor’s Center located along Highway 111 on the east shore of the Salton Sea.  At this location there were some people fishing, but I didn’t see anyone else at the park.  I strolled along the shore for a short distance. From afar, it looked like white sand lined the shore, but upon closer inspection it was all crushed bones and shells.

While the sea was beautiful and the birds abundant, there isn’t much to do there unless you like to fish.  It is, however, a great place to photograph the birds and bird watch.  I stopped in several locations along the east shore, south of the Visitor’s Center, and I took pictures of seagulls, pelicans and other birds as they dove into the sea to hunt for their lunch.  As I continued south along the shoreline I passed many abandoned structures, houses and what used to be bait shops.  It was obvious that businesses have died off with the birds and the fish.  The little towns that once used to boom with winter tourists are no more than a shadow of the past.  A memory of what used to be. 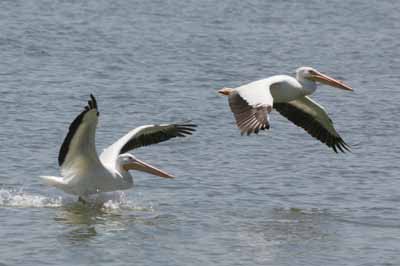