Just past Salvation Mountain is the entrance to Slab City, “The Last Free Place.”  Squatters and snowbirds have taken up roost at an old, abandoned military base, once called the Marine Barracks Camp Dunlop.  It was shut down back in 1961. Some military servicemen remained after the base closed, and people have been living there ever since.  There is no charge for parking or camping.  There is no running water or electricity.   Just the slabs from the old military buildings remain.  The site has been decommissioned and is not managed by any agency. 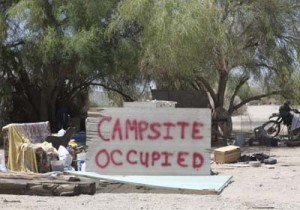 A campsite that someone is reserving for themselves.

There are many slabs and campsite areas within Slab City.  There is even a church and an 18-hole golf course (in the desert, no grass).  One woman started the Lizard Library, where you can borrow, donate or trade books and magazines.  It has grown to fill a couple of makeshift rooms, and it is always open to the residents and campers at Slab City. Another Slabber set up a nightclub called The Range.  It is a stage between two old buses.  Seats were scrounged from old car, bus and theatre seats.  They have open mike night and other scheduled entertainment there.  I’ve read that they get some good talent playing there on a regular basis. 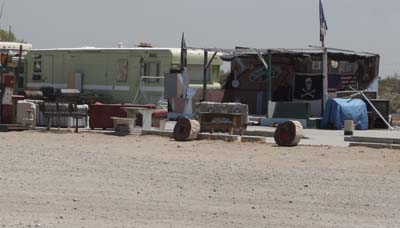 Trailer on a campsite.

Most of the campsites are marked with a trailer – other sites just have piles of junk strewn about.  Some trailers are well kept and others not well kept at all.   There is an organization trying to clean up Slab City.  During my visit I saw a lot of junk, so I’m not sure how successful they have been.  At one time the county tried to come in and make Slab City a fee-based campground, but they couldn’t make it happen.  In a strange twist of fate, since Slab City contains a religious monument, Salvation Mountain, it could not legally be converted to a fee-based site.  Salvation Mountain saved Slab City and it is what keeps it free today. 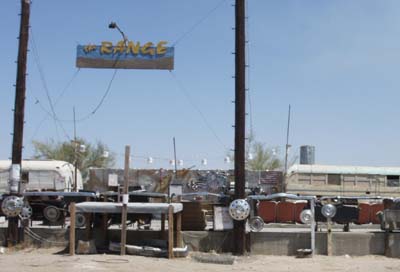 The summer temperatures at Slab City can reach 110F or more, so it is not the most temperate of climates. The people who live there year-round are living on their social security benefits or other limited means.  There are about 150 year-round residents. They may have been forced there due to poverty or maybe they chose to live there to fulfill their need to be free from the American government or social strictures.  During the winter months, the snowbirds arrive at Slab City for the cooler months.  They include weekenders and RV campers who travel to other areas in the summer months, only to return to Slab City in the winter, when the temperatures are nice. 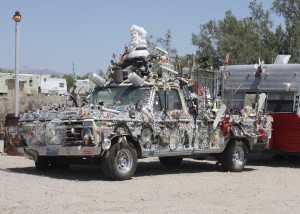 There were a couple of pylon structures that were covered with graffiti.  As we drove up to take a few photos, we heard a dog barking.  Obviously it was someone’s home, so we slowly retreated.  A minute or so later a man on a motorbike buzzed by us coming from that direction.   Just across the road from this location were two structures that were built into the ground.  The roofs were covered in desert sand to camouflage their presence.  It looked like green living to me! Interesting.

As I drove through the center of Slab City the scene reminded me of those movies set in the future where humans live in caves or abandoned buildings and collect junk from what remains after a nuclear war, only with a creative twist.  Mad Max meets Burning Man. 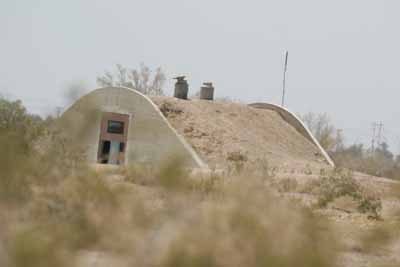 One of the old military building that looks like an underground house.

I plan to return sometime in the winter when the sites are filled with the locals and seasonal campers. There is something about Slab City that makes it different from other places.  There is a freedom there, a subculture of sorts, that enables an individual to really be free from the burdens of traditional society.

Slab City was featured in the book Into the Wild and also in the 2007 movie of the same name. The video for Fourth of July by Shooter Jennings is partially set at Slab City.

From Los Angeles or Phoenix, take Interstate 10 t the 86S (just east of Indio, CA). Travel south for about 11 miles to 66th ave. (Hwy 195). There is a big gas station and truck stop on the left. If you miss this turn you’ll end up on the wrong side of the Salton Sea. Turn left (east) and go about a 1/2 mile to Highway 111. Turn right (south) and go about 42 miles to Niland, California. Turn left (east) on Main St. (which eventually turns into Beal Rd.) and travel for a little over 3 miles.

From San Diego or Yuma, take Interstate 8 to Hwy. 111 north. Niland is about 32 miles. Turn east on Main St. (turns into Beal Road) and go a little over 3 miles to Salvation Mountain and Slab City.