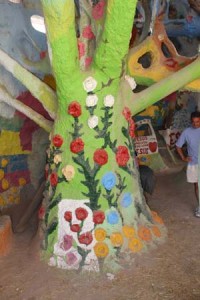 A tree built from tractor tires, adobe clay and stray branches from the desert.

Just south of the Salton Sea Visitor’s Center is a little town called Niland, CA, home to the infamous Salvation Mountain and Slab City.   Just a few miles out of town on Beal Rd. a colorful scene appears in the distance.
It rises up from the desert, a beacon, signaling travelers to draw closer.  This beacon is called Salvation Mountain.  What makes Salvation Mountain special is that it is a man made mountain of adobe clay, hay bales and support beams. I suspect the mountain is about three stories high. The smooth adobe clay is painted over with colorful images and bible scriptures.  More than 100,000 gallons of paint, 25 years of hard labor, 1000’s of hay bales and bucketfuls of adobe have gone into the creation of Salvation Mountain. 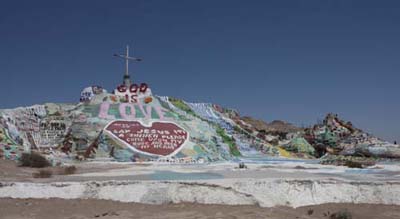 Why build a mountain in the desert?  One man had a dream, a purpose.  To spread the message “God is Love.”  The red and pink letters that crown the mountaintop spell this message out to whoever comes close enough to read it.  Thousands of tourists have traveled to Niland, CA to visit Salvation Mountain.   Leonard Knight, the man behind the mountain, lives at Salvation Mountain.  He continues to work on it each day, adding more structures, color and messages.   Ripley’s Believe It Or Not, National Geographic, The Discovery Channel and other news media have told the story of Salvation Mountain.  The media has given it more fame and attention than Leonard could have ever dreamed possible.  He has achieved his goal of spreading the word about God in a big way.  He has dedicated his entire life to it. 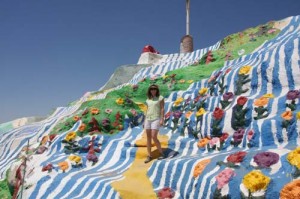 Take a walk up the yellow brick road!

If you find yourself out in Niland or nearby, stop in and visit Leonard at Salvation Mountain.  He will give you a tour.  There is no charge.  You can leave a donation or take some extra paint along with you to donate to his project.  He loves visitors and he enjoys telling them about his life’s work.

You can take a walk up the mountain along the yellow brick road.  The view from the top is a good one.  The new section that Leonard is working on is called “The Museum.” It is a domed structure with car windows to let the light in.  He has  flowers painted inside of it and several very large trees he has built out of old car and tractor tires.  They are covered with adobe and painted.  The branches are real wood found in the desert.  The branches hold up the dome. 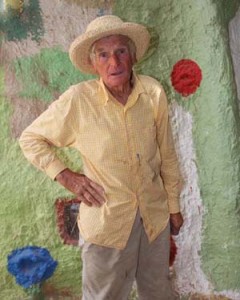 It was very interesting to learn about Salvation Mountain and what inspired Leonard Knight to spend the last 25 years of his life building it.  He is a man with incredible faith and vision.  To learn more about Leonard Knight, click here.

Author’s Note – Feb. 2014: Time has taken its toll on Leonard Knight and his Salvation Mountain. In 2010 his hearing and eyesight began to fail, forcing him to leave his beloved Salvation Mountain. In December of 2011, additional health problems caused his move to a caregiver facility east of San Diego, CA.  He tired to visit the Mountain every few months when possible. Knight died 2/10/14 at a convalescent hospital in eastern San Diego County where he had been a resident for more than two years. He had suffered the ravages of diabetes, along with other ailments of old age. He was 82 years old.

Salivation Mountain is now being cared for by a non-profit group, Salvation Mountain Inc. It has hired a caretaker to maintain the site, and to protect it from vandals and thieves. The desert’s natural elements, rain, wind, and heat, create the need for constant maintenance of Leonard Knight’s Salvation Mountain.