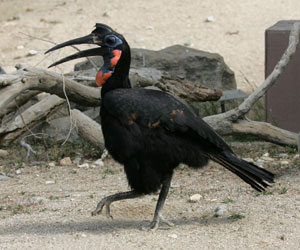 Ground hornbills are generally considered a subfamily of the larger family of hornbills (Bucerotidae). They differ however from the typical hornbill in several ways. Ground hornbills do not seal their nests, they walk instead of hopping, they lack a carotid artery and they have one more vertebrae (15 instead of 14). Some ornithologists classify ground hornbills in their own family, called Bucorvidae. They are primarily ground dwellers.

Not endangered, but unstable. In Africa they have initiated a conservation program to help increase their numbers in the wild.

The ground hornbill is a large bird that closely resembles a turkey or a vulture. It is diurnal and spends about 70% of its time foraging for food. The birds travel in pairs or small groups.

A loud call that is a deep, booming hoo. The inflation of the neck wattle is used to make booming or grunting sounds.

Ground Hornbills are omnivores and eat small rodents, lizards and snakes. They eat all types of insects including beetles and caterpillars. Seeds, fruit and roots are also part of their diet. They spend most of their time in the wild foraging for food. Sometimes the hornbills will feed on the scraps of prey killed by other animals.

Ground hornbills fall prey primarily to leopards and humans. Some tribes use the hornbill in their tribal medicine. They also may become victims to humans who move into their range through the expansion of housing developments. Ground hornbills are known to attack their reflection in glass windows. This disturbing behavior may cause homeowners to kill them.

Hunters in Sudan use a stuffed hornbill strapped to their heads as a hunting tactic. The quarry may think the hunters are hornbills walking through the grass. This allows the tribesmen to crawl nearer and nearer, until it is too late for their prey to flee. Some villages believe the ground hornbill is a good luck charm and have one as their mascot. Other native people think they are bad luck if they don’t fly.

A monogamous breeder, the hornbill will often mate with the same partner. They are slow breeders and don’t start reproducing until they are approximately 4 to 6 years old. Some species of hornbill participate in cooperative breeding, but most often they are monogamous.

Natural holes in trees, stumps or crevices in rocks are the typical ground-nesting site for these birds. The female hornbill will lay from 1 to 2 eggs, which are laid several days apart. The incubation period ranges from 37 to 40 days. During the incubation period the male forages and provides food to the female. The eggs hatch at several-day intervals. The competition for food between the chicks may leave one undernourished. One usually does not survive the other. After about 12 days the mother will leave the nest for short periods of time to forage for food. The male hornbill continues to help with feeding the female and chicks. The chicks will stay in the nest for up to 3 months before venturing out on their own. The parents may continue to feed the young hornbills for the first 12 months of their lives. The ground hornbill has been known to live 35 to 40 years in captivity.