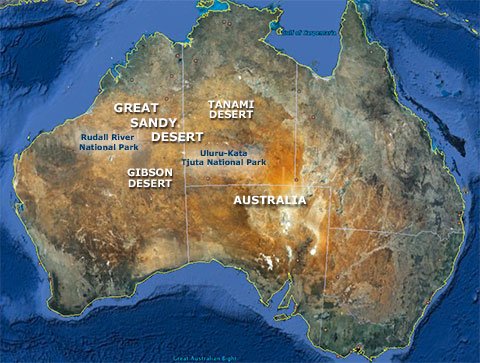 The Great Sandy Desert is located across northwest and central Australia. It contains two of the country's most famous parks, the Rudall River National Park and Uluru-Kata Tjuta National Park where the famous Ayers Rock is located.

Spanning roughly 150,000 square miles, western Australia's Great Sandy Desert is the second largest of the continent's 10 desert regions--all, collectively, located across the central and northwestern part of the country. The largest is the 164,000-square-mile Great Victoria Desert, located in the southwestern part. The smallest is the 480-square-mile Pedirka Desert, located in the south-central part.

The Great Sandy Desert extends from northwest Australia's Indian Ocean coastline inland, southeastward for more than 800 miles. It lies between the 71,000-square mile Tanami Desert, to the northeast, and the 60,000-square mile Gibson Desert, to the south. Those three deserts converge near the geographic center of the continent, at the famed bare red sandstone dome Ayers Rock, or, in the aboriginal language, "Uluru."

The Great Sandy Desert falls into the classification of a "hot desert." This means that in a typical year, it receives little rain, and it experiences high temperatures, low humidity and high evaporation rates.

Gently undulating and sparsely vegetated, the Great Sandy is largely characterized by short ephemeral drainages, several lakes and wetlands, red sand dunefields, and remnant rocky outcrops, according to the Australian Natural Resources Atlas. Typical of the world's deserts, most of the Big Sandy's creeks and rivers flow only after heavy rainfalls, sometimes leaving short-lived playa lakes in their wake. Many of its longer-lived lakes and wetlands, arising primarily from springs and seepages, owe their origins to ancient and now inactive river systems, one that flowed across the northern part of the desert and another that flowed across the southern part. The Great Sandy's single modern river, the Rudall, rising in highlands and feeding wetlands along its course, flows across the desert and empties into the large, salty Eva Broadhurst Lake. It lies in the heart of the Karlamilyi National Park. The Great Sandy's dunefields comprise both variable and remarkably consistent forms. Its rocky outcrops include sandstone, siltstone and mudstone ridges and ranges in the southeastern part of the desert.

The Great Sandy Desert's most striking features include: