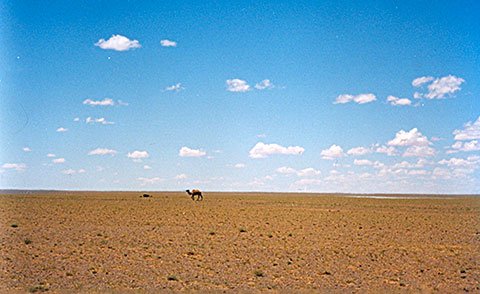 This desert is reported to be so long that it would take a year to go from end to end; and at the narrowest point it takes a month to cross it. It consists entirely of mountains and sands and valleys. There is nothing at all to eat.

The Gobi -- the fifth largest desert in the world -- arcs across the borderlands of northern China and southern Mongolia. Extending for some 1200 miles east northeast from China's Tian Shan, or "Celestial," mountain range into China's Manchurian region, it covers well over half a million square miles, lying in the heart of Asia's most remote region. With the elevations of its basins ranging from roughly 1600 to 5000 feet above sea level, the Gobi lies at about the same latitudes as those of central Europe and the northern United States. Its arid climate is attributable to its location, in the rain shadow of the Himalayan and connecting ranges, which intercept moisture-laden clouds before they can reach most of the Gobi. The word "Gobi" means "large and dry" in the Mongolian language.

Across its span, the Gobi -- a sprawling patchwork of a desert basins and mountain ranges -- features primarily a firm and often rocky terrain marked by gravels and sparse vegetation. It has relatively few sand dunes, with those having been formed through time under the forces of persistent windstorms or heavy erosion. Its harsh terrain discouraged significant human occupation for thousands of years. 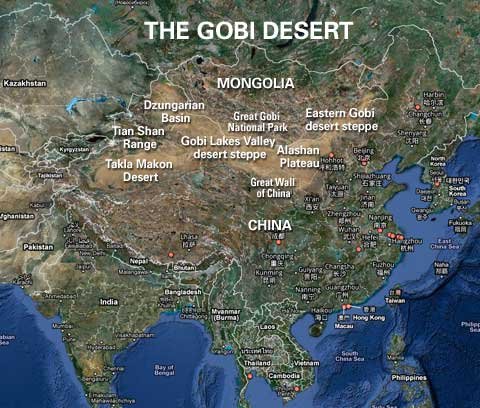 The desert, according to Wild World -- an important source on the Gobi Desert -- encompasses five broad, and diverse, ecoregions:

Unfortunately, to some extent, all the Gobi's ecoregions have suffered from human intrusions--for instance, overgrazing, irrigation agriculture, overhunting and mineral exploitation. Further, the desert appears to be expanding, raising concern in many quarters. Various wildlife species may be facing extinction.