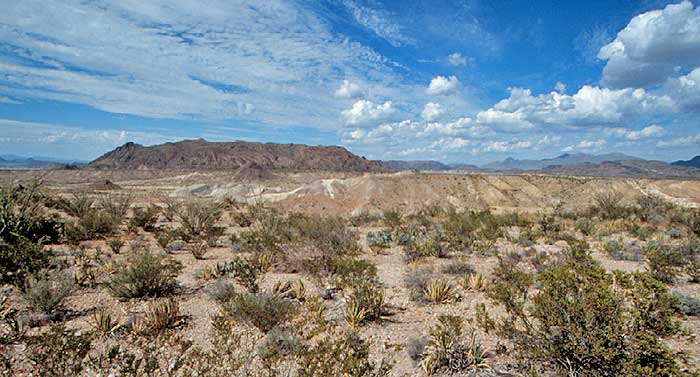 Chihuahuan Desert -- the largest desert in North America covering more than 200,000 square miles -- Most of it lies south of the international border. In the U.S. it extends into parts of New Mexico, Texas and sections of southeastern Arizona. Its minimum elevation is above 1,000 feet, but the vast majority of this desert lies at elevations between 3,500 and 5,000 feet.

This desert covers such a large area that it is difficult to characterize its geology, but limestone and calcareous soils are common. 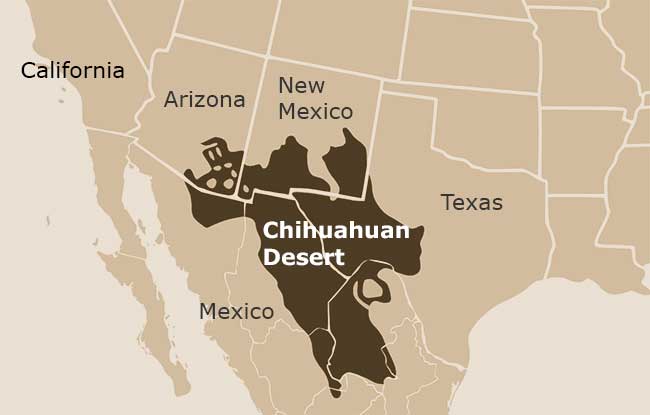 Like the Great Basin Desert, this is a shrub desert, but the biological diversity of perennial plant life is relatively low. Yuccas and agaves, growing with grasses and often Creosote Bushes, give this desert its characteristic appearance.

Prickly-pears and Mormon Tea are also contribute prevalent. Tarbush is sometimes a dominant shrub. Honey Mesquite grows along washes and playas. White-thorn Acacia, Allthorn and Ocotillo are other large, conspicuous plants of the Chihuahuan Desert.

Approximate DesertUSA Boundaries: Bordered on the west by Arizona's U.S. Route 191, on the north by Interstate 40, on the east by Texas' U.S. Route 385, and south to the Mexican border. 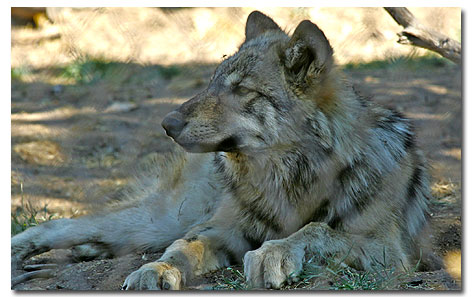 Some Mexican Gray Wolves are still in the Chihuahuan Desert