Home of the Saguaro Cactus 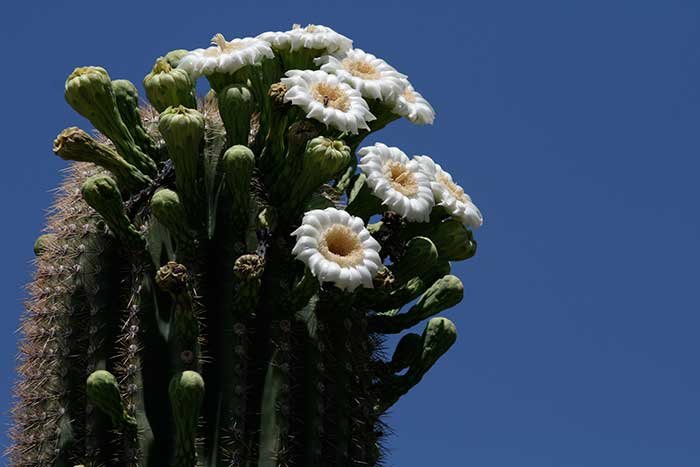 The Sonoran Desert is an arid region covering approximately 100,000 square miles in southwestern Arizona and southeastern California, as well as most of Baja California and the western half of the state of Sonora, Mexico. Subdivisions of this hot, dry region include the Colorado and Yuma deserts. Irrigation has produced many fertile agricultural areas, including the Coachella and Imperial valleys of California. Warm winters attract tourists to Sonora Desert resorts in Palm Springs, California, and Tucson and Phoenix, Arizona. 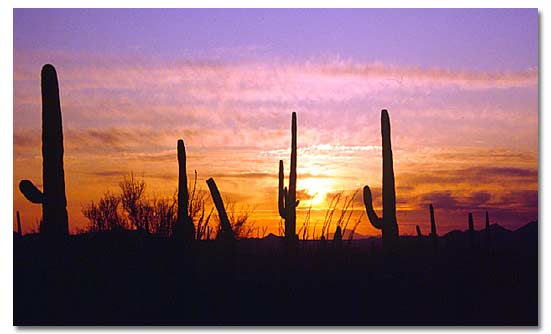 This is the hottest of our North American deserts, but a distinctly bimodal rainfall pattern produces a high biological diversity. Winter storms from the Pacific nourish many West Coast annuals such as poppies and lupines, while well-developed summer monsoons host both annuals and woody plants originating from the south. Freezing conditions can be expected for a few nights in winter.

Trees are usually well developed on the desert ranges and their bajadas. Often abundant on these well-drained soils are little-leaf palo verdes, desert ironwoods, catclaw and saguaro.

The understory consists of three, four or even five layers of smaller woody shrubs. Tall chollas may occur in an almost bewildering array of species. The alluvial lowlands host communities of desert saltbush, wolfberry and bursage. On coarser soils, creosote bush and bursage communities may stretch for miles. Where the water table is high, honey or velvet mesquite may form dense bosques or woodlands.

Other species are restricted to alkaline areas. Stream sides may be lined with riparian woodlands composed of Arizona ash, Arizona black walnut, Fremont cottonwood and various willows, with a dense understory of arrow-weed, seepwillow and carrizo. The Sonora Desert is rich in animal life as well, with many species in all groups derived from tropical and subtropical regions. 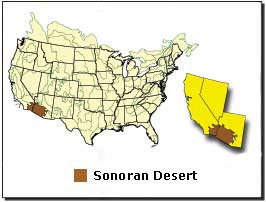 The western part of the Sonora Desert (sometimes called the "Colorado Desert") is closer to the source of Pacific storms and is noted for spectacular spring flowering of ephemerals when there is winter-spring rainfall. (This phenomenon is not limited to this location.) However, the western portion is relatively depauperate, lacking many of the species such as the saguaro that depend on good summer rainfall. 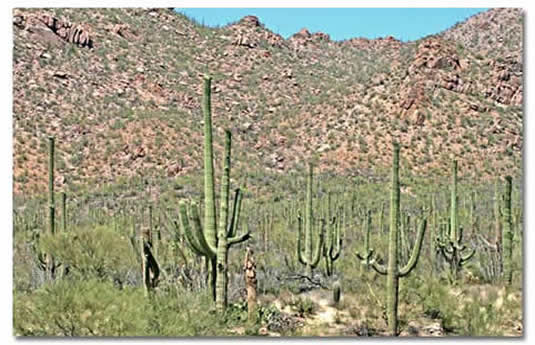 Approximate Boundaries: Bordered on the west by Borrego Springs, and San Gorgonio Pass in southern California, on the north by Interstate 10 in California and Interstate 40 in Arizona, on the east by Arizona's U.S. Route 191, south to the tip of Baja California, Mexico.

"The Sonoran Desert National Monument is a magnificent example of untrammeled Sonoran desert landscape. The area encompasses a functioning desert ecosystem with an extraordinary array of biological, scientific, and historic resources. The most biologically diverse of the North American deserts, the monument consists of distinct mountain ranges separated by wide valleys, and includes large saguaro cactus forest communities that provide excellent habitat for a wide range of wildlife species.
The monument’s biological resources include a spectacular diversity of plant and ani- mal species. The higher peaks include unique woodland assemblages, while the lower elevation lands offer one of the most structurally complex examples of palo verde/mixed cacti association in the Sonoran Desert. The dense stands of leguminous trees and cacti are dominated by saguaros, palo-verde trees, ironwood, prickly pear, and cholla. Important endangered acuna pineapple cactus is also found in the monument.

"The most striking aspect of the plant communities within the monument are the abundant saguaro cactus forests. The saguaro is a signature plant of the Sonoran Desert. Individual saguaro plants are indeed magnificent, but a forest of these plants, together with the wide variety of trees, shrubs, and herbaceous plants that make up the forest community, is an impressive site to behold. The saguaro cactus forests within the monument are a national treasure, rivaling those within the Saguaro National Park.

"The diverse plant communities present in the monument support a wide variety of wildlife, including the endangered Sonoran pronghorn, a robust population of desert bighorn sheep, especially in the Maricopa Mountains area, and other mammalian spe- cies such as mule deer, javelina, mountain lion, gray fox, and bobcat. Bat species within the monument include the endangered lesser long-nosed bat, the California leaf-nosed bat, and the cave myotis. Over 200 species of birds are found in the monument, including 59 species known to nest in the Vekol Valley area. Numerous species of raptors and owls inhabit the monument, including the elf owl and the western screech owl. The monument also supports a diverse array of reptiles and amphibians, including the Sonoran desert tortoise and the red-backed whiptail. The Bureau of Land Management has designated approximately 25,000 acres of land in the Maricopa Mountains area as critical habitat for the desert tortoise. The Vekol Valley and Sand Tank Mountain areas contain especially diverse and robust populations of amphibians. During summer rainfall events, thousands of Sonoran green toads in the Vekol Valley can be heard moving around and calling out.

"The monument also contains many significant archaeological and historic sites, including rock art sites, lithic quarries, and scattered artifacts. Vekol Wash is believed to have been an important prehistoric travel and trade corridor between the Hohokam and tribes located in what is now Mexico. Signs of large villages and permanent habitat sites occur throughout the area, and particu- larly along the bajadas of the Table Top Mountains. Occupants of these villages were the ancestors of today’s O’odham, Quechan, Cocopah, Maricopa, and other tribes. The monument also contains a much used trailcorridor 23 miles long in which are found remnants of several important historic trails, including the Juan Bautista de Anza National Historic Trail, the Mormon Battalion Trail, and the Butterfield Overland Stage Route."

The Attempt to Create a Sonoran Desert National Park

More Deserts in the USA

Some parks and places of interest: