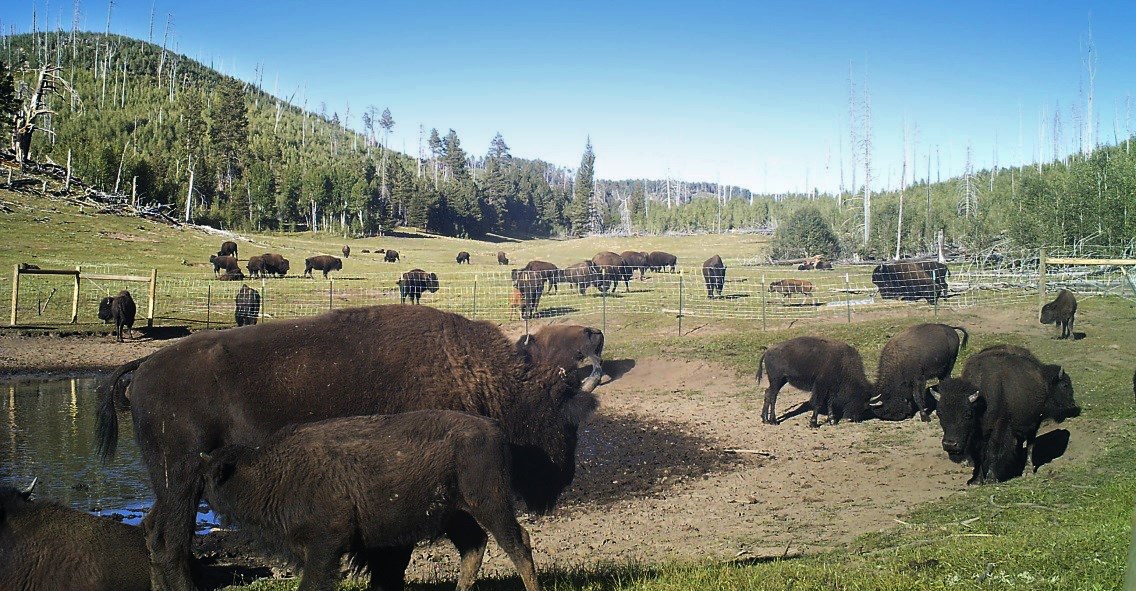 Visitors to the North Rim may see large herds of bison in the meadows near the Entrance Station. Bison are not native to Grand Canyon National Park. In fact, these particular animals were brought to the Kaibab Plateau in 1906 in an effort to breed them with cattle and produce a hardy bison variety. The experiment was not economically successful and was abandoned several years later.

Today, this hybrid group, or “beefalo” herd, is managed by the Arizona Game and Fish Department. The House Rock Valley Wildlife Area, located just east of the park, was designated as a bison range in 1950 to provide them a home and reduce conflicts with wildlife and cattle.

Since 2000, the bison hybrids have been traveling from the wildlife area to the Kaibab Plateau and into Grand Canyon National Park. The herd now numbers more than 400 head, with the majority staying within park boundaries year round. Unfortunately these extremely large grazing animals are fouling sensitive and critical water sources, trampling and removing delicate vegetation, and compacting fragile soils. Grand Canyon National Park is working closely with federal and state managers who are determined to reduce or eliminate the bison’s negative impacts to park resources.

Bison may appear tame and slow, but they are unpredictable and dangerous. They weigh up to 2,000 pounds (900 kg) and sprint at 30 miles (48 km) per hour, three times faster than you can run. For your safety, you must stay at least 75 feet (23 m) from bison.


More on the Bison - American Buffalo