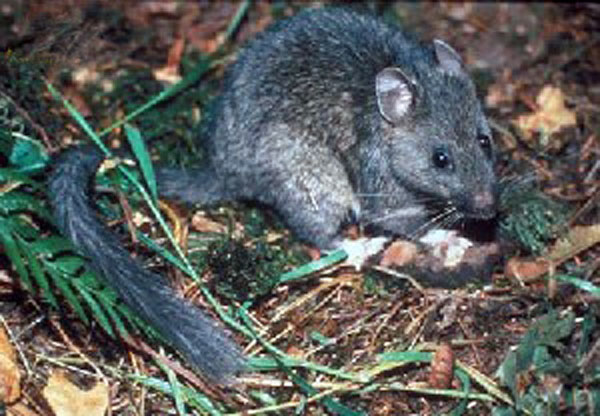 Wood rats are commonly called pack rats or trade rats because they collect various objects and bits of material to deposit in, or use in the construction of, their nests. They are especially fond of small, bright, shiny objects which they will readily confiscate.

It is a popular superstition that the woodrat is a fair businessman, who when he expropriates something, always leaves a replacement that is of equal value. In fact, while carrying one trophy, the rat may see another that is more attractive, and so puts down the first to pick up the second, since it can carry only one item at a time.

Widely distributed throughout all the North American desert regions, north to Canada.

There are 22 species of woodrats -- more often called packrats or trading rats -- in North and Central America. These rodents belong to the family Cricetidae (order Rodentia). They are found from deserts and forests to high, rocky mountainsides. There are seven species of woodrats in the North American deserts.

Wood rats are pale buff, gray or reddish brown, usually with white undersides and feet. They have relatively large ears and, normally, hairy tails. They range in length from 8 to 20 inches, including their 3- to 9-inch tail.

Woodrats live in nests built of plant material like branches, twigs, sticks and other debris. The huge, beaver-dam-shaped structures may be up to 4 feet across. They are usually constructed in a tree or on the ground at the base of a tree or rocky ledge. Woodrats can become quite a nuisance, getting into everything from attics to car engines, stealing their treasures, damaging electrical wiring and wreaking general, noisy havoc. 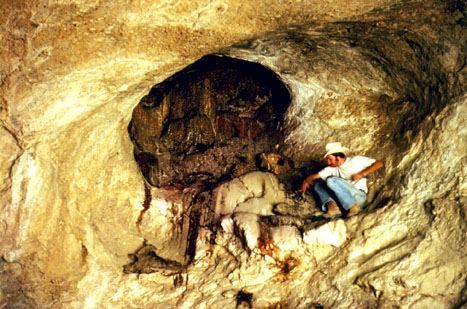 A massive complex Pleistocene packrat midden (in the alcove in the center of the image) in a cave in eastern Nevada. Photo: USGS

In the deserts, nests are often constructed in or around cactus. The nest provides both shelter from extremes of desert temperatures and protection from predators by using cactus pads and cactus spines in the construction. Such construction methods help keep the nest much cooler than the surrounding desert floor in summer, while helping retain the animals' body heat in winter.

The nests of desert-dwelling woodrats, often built in and of cholla and beavertail cactus, are usually impregnable to predators, except for the badger or gila monster (thanks Jerrold J. Feldner - see comment below). The woodrat is most vulnerable when out foraging for food, at which times a coyote, fox, snake or owl may prey upon it.

Primarily nocturnal and vegetarian, desert woodrats survive on a diet of spiny cactus, yucca pods, bark, berries, pinyon nuts, seeds and any available green vegetation. They rely on succulent plants for their water, since they do not have the refined metabolic and water conservation capabilities of pocket mice or kangaroo rats. They are one of the few animals that can navigate with impunity between cactus spines to feed on the juicy pads.

The reproductive habits of rodents are extremely variable in the wild and can become even more so when domesticated. Most are born naked and helpless and are cared for in nests. Some desert female woodrats have been known to deliver up to five litters per year with as many as five young per litter.

The young may open their eyes at 10-12 days and are usually weaned between 14 and 42 days. Most become sexually mature after 60 days. If the litter is especially large, the mother woodrat may die after weaning. Most rodents are polygamous and some mate for the duration of a single breeding season.

I was reading your page on the pack rat and have a few items for you:

1. Gila Monsters, as well as badgers, rip into nests with impunity. A Gila can make his living for the whole year by gobbling a couple of litters of pack rats and they do so quite frequently.

2. Rattlesnakes, especially western diamondbacks (Crotalus atrox) are often found commensally for part of the year in pack rat middens. It seems that the snakes go deep into the middens and are sealed in by the rats during the cold part of the year. The snakes do not molest the rats while brumating and, apparently, the rats leave the snakes alone when they are in a cold induced torpor. When the warm weather returns, the snakes are able to bust out and resume activity. It is at this time (I assume) that the rattler again becomes predator and the rat assumes its rightful role as prey or snake food).

3. The structures that Neotoma build are called "Middens" in the vernacular. They are very valuable as a resource as they are frequently built upon by generations of rats. Yea, verily, the rat doth utilize the midden for centuries, yea, even unto millennia. So, you can get a pretty deep and complicated structure that has been utilized by rats for many years.
Sometimes a midden is abandoned and then re-occupied centuries later. Sometimes it is just plain abandoned. But, the valuable plant and animal material is left behind for future analysis by such scientists as the most excellent Tom Van Devender of the Arizona Sonora Desert Museum. Tom is probably the world's foremost expert on pack rat middens. He practices "paleoneotomology" as he gets great results out of analyzing the contents of the middens. Some of them go back to Pleistocene times!