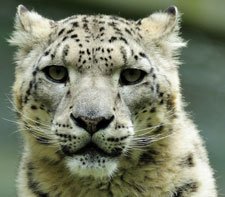 The snow leopard -- a secretive loner, a swift and ferocious hunter, an unearthly beauty, an almost spiritual persona -- haunts the highlands of central and southern Asia. It has been called a ghost animal and often invested with mystical powers.

The snow leopard is classed as one of the moderate-sized "big cats," which, collectively, include lions, tigers, cheetahs, leopards, jaguars and other large felines--a world-wide total of three dozen species.

The snow leopard -- with a widely scattered population of no more than several thousand individuals -- lives in a mountainous land that covers roughly 470,000 square miles. Its range spans 12 countries, extending from Afghanistan and Pakistan northeastward into northern China and Mongolia.

In summer, it prefers alpine meadows and rocky formations as high as 20,000 feet elevation, and in the winter, it frequents warmer, forested slopes at 4000 to 6500 feet. "Snow leopards," said the International Snow Leopard Trust, "prefer steep terrain broken by cliffs, ridges, gullies, and rocky outcrops, although they may traverse relatively gentle country, especially if ridges offer suitable travel routes and shrubs or rock outcrops provide sufficient cover." Depending on the availability of prey, the leopard will lay a solitary claim to a territory extending across a few square miles to some tens of square miles. It ranges widely across its territory, often day by day.

An opportunistic predator, the snow leopard may take an animal three times its own weight, but it will also readily take a small rodent or a bird. Near settlements, it will prey on domestic livestock, bringing it into conflict with farmers and herders. It also feeds on carrion. Unlike most cats, it eats some vegetation, for instance, grass. Given the opportunity, "Adult snow leopards kill a large prey animal every 10 - 15 days, and remain on the kill for an average of 3 - 4 days, and sometimes up to a week," according to the International Snow Leopard Trust. "In general, their most commonly taken prey consists of wild sheep and goats..., but also includes pikas, hares, and game birds..."

According to the San Diego Zoo, the cat, living largely in isolation, marks it territory by leaving smell and visual "notices" such as: pungent urine and fecal deposits in scraped soil depressions and distinctive claw marks on tree trunks and stone surfaces.

Come breeding season, in mid- to late winter, the cat uses its voice to beckon a potential mate, with the female advertising her availability with loud meowing. Over several days, a pair may couple several dozen times. After mating, the male returns to his range, leaving the female with sole responsibility for bearing and raising the young. After some 14 to 15 weeks, she delivers one to five cubs in a den that she has probably used before. She has prepared it for her new brood by lining it with her fur.

For the first four or five weeks, the cubs depend totally on their mother, who spends most of her time nurturing and nursing them. They grow steadily. They open their eyes after about seven days. They begin to play and walk after about a month. They begin to eat solid foods, meaning that their mother must now take time to hunt to provide for them. They become weaned after about two to two-and-a-half months. They begin to venture from their den, shadowing their mother as they learn to hunt. They will stay with her through the coming winter, finally leaving to establish their own ranges, perhaps traveling as much as 100 miles to find a suitable territory, about 18 months after their birth. They reach sexual maturity at about two or three years of age. With good luck, they can expect to live for about 12 to 14 years in the wild.

The snow leopard has few natural enemies, but it suffers from a variety of other factors, which, says authority Stephanie Theile in her article "Fading Footprints: The Killing and Trade of Snow Leopards," show "regional variation... The picture that emerges shows that the species is menaced primarily [by humans] by direct, intentional killing and loss of wild prey, with habitat fragmentation and accidental trapping or poisoning as secondary threats. Direct killing is driven by two main objectives...the desire to protect livestock...and the desire to trade in the animal or its parts..." The snow leopard has been listed as an endangered species by the International Union for the Conservation of Nature since 1988.

The snow leopard has a mystique that makes it almost unique among the big cats:

DesertUSA is a comprehensive resource about the North American deserts and Southwest destinations. Learn about desert biomes while you discover how desert plants and animals learn to adapt to the harsh desert environment. Find travel information about national parks, state parks, BLM land, and Southwest cities and towns located in or near the desert regions of the United States. Access maps and information about the Sonoran Desert, Mojave Desert, Great Basin Desert, and Chihuahuan Desert.