Out and About on the Playa 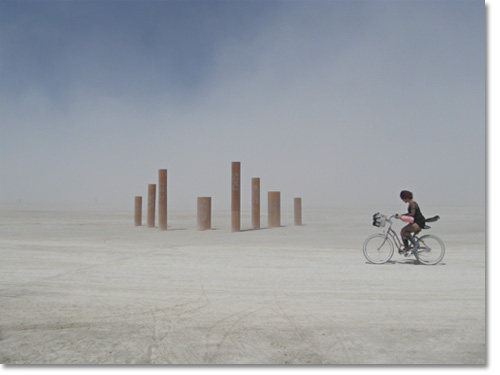 Burning Man takes place around Labor Day annually, in the Black Rock Desert in Nevada. The Black Rock Desert is a prehistoric lake bed, termed a "playa". Dry and flat in the summer, in the winter precipitation creates a wet finish which smoothes out the surface once again. Though a controversial event, both in its counter culture image, and in the effects of such a huge temporary population on a natural enviroment, Burning Man draws huge crowds, and benefits the local economies of the small surrounding communities. The festival drew 47,000 people in 2007. At its climax, a giant "Man" built by the event organizers is burned amidst fireworks, fanfare and revelry. 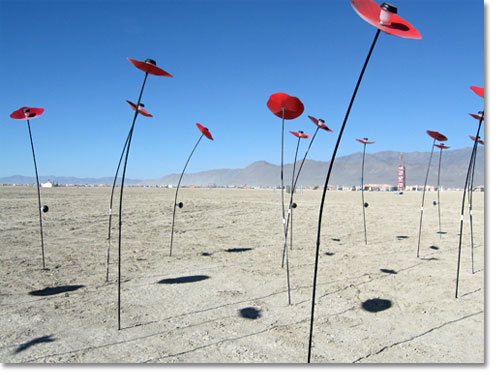 Red flowers popped out of the playa. [Popaver Rubrum Giganticum by Gary Miller]

Burning Man 2008, a mixture of the bizarre and the sublime, lived up to its reputation for dust storms, heat, art and counter culture. The burning of the Man, the central celebration of the festival, was delayed due to extreme weather, ie whiteout conditions. Though plans for the usual pyrotechnic show were said to be abbreviated, the fireworks were still impressive and the burn occurred as planned Saturday night, Aug 30th at about 10:30 pm. Pacific Time.

This year's theme was "The American Dream" and artists' responses to the concept ranged from a spiritual drive-through, with a take-out menu offering Satori and Gnosis with some Absolution, Good Karma and Hope on the side; to an enormous, impressive and elegant pair of silvery wings. Though many of the art pieces were integrated with lighting, and meant to be seen at night that way, they were beautiful in the daytime, when the harsh sun and the alkaline playa formed a dramatic, and desolate backdrop. 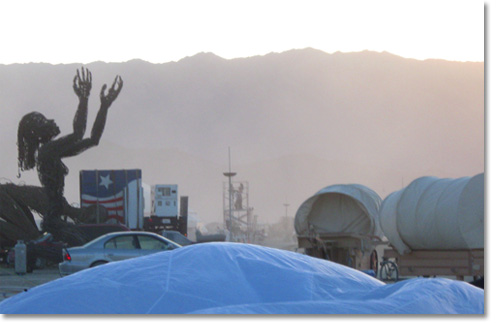 Early arrivals at Burning Man 2008 prepare to set up camp.

The event's demands on the viewers are far from museum-style. Intrepid trekkers risk heatstroke as they hike or pedal their bicycles across the dry lake bed to encounter each piece, standing in place as if set there by a giant invisible hand. Sudden wind storms, called white-outs, obscure the field of vision 360 degrees around, and then hide and reveal the art constructs. It's as if the desert has lifted its canvas right into the air with you, adding its own dusty drama to heighten your experience. 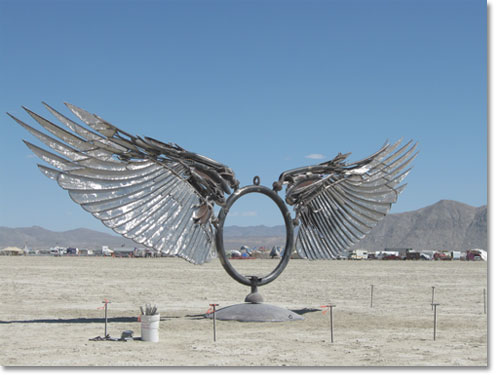 The exact location of the Burning Man event is determined by the Bureau of Land Management. It is moved a bit annually to prevent wear and tear on the ecology of the playa. This year, the biking was tough, as much of the playa area was soft sand. Wheels came to a rapid stop in those locations, though bikers learned to recognize the sandy areas, and either wheel around them, or prepare to power through with a burst of energy, difficult to maintain in the hot, windy expanse. 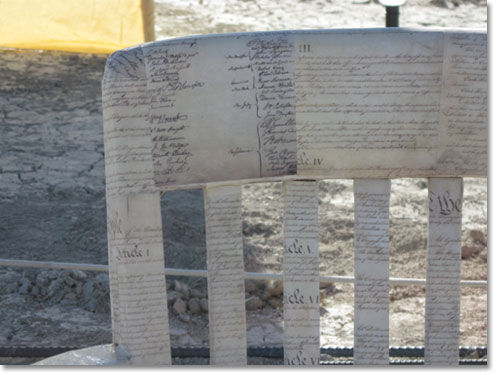 The lucky have built motorized "art cars" or become friends with an art car owner and can travel across the playa in style. Art cars must be licensed by the DMV (Department of Mutant Vehicles). Criteria includes aesthetic impact and safety. When the art cars begin moving around the landscape, the impact of the whole event becomes even more surreal. Boats, magic carpets, moving couches, all kinds of moving art drifts around and through the fixed pieces. 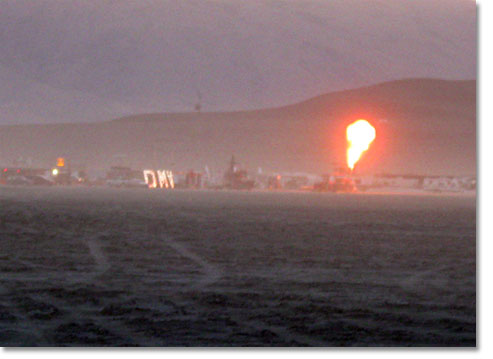 The DMV (Department of Mutant Vehicles) is opened for business.

Somehow the experience of biking on the playa, alone or in company can become part of the hunt - the effort expended resulting in found rewards such as a desk with lamp calling out for a student or author's occupation (the art site still in progress as a note on the surface proclaimed), a kind of Mayan pyramid with golden globes on the edges, and a strange pavilion, woven of tubular steel, with a tubular steel flag on top, in which one could imagine some alien wedding taking place. The Mayan pyramid, entitled Rock Opera - In My Dream by Ronnie Nelson, was due to host a performance "with spectacular pyrotechnics & flame effects, [featuring] over 150 fire performers, belly dancers, circus performers, stilt walkers, drummers, and dancers", as described on the Burning Man site in a preview paragraph by the artist. It was beautiful though, as it was, standing serenely by itself as though air-lifted from another time in South America. 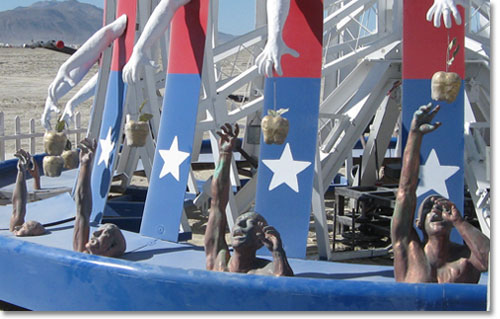 The American Dream theme inspired artist Peter Hudson to create Tantalus, a giant Uncle Sam's hat of a merry-go-round with beautifully formed figures reaching up, always just slightly away from grasping golden apples dangled by cruel, ghostly white arms. Tantalus, in Greek myth, stole ambrosia from the Gods' table and taught his people the secret of its creation. His punishment from the Gods was to be forever hungry, and forever reaching, for an apple just beyond him. Hudson seems to find a parallel in American consumerism perhaps. 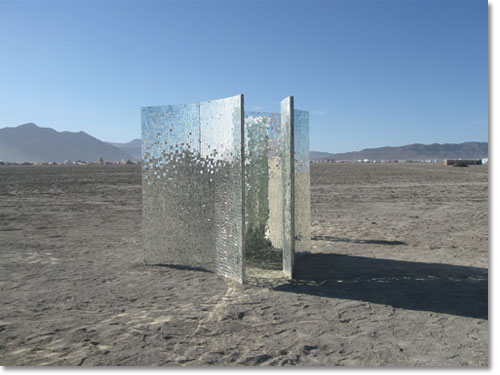 You are All so Many of Me by Michael Emery

Little dots on the horizon beckon. Upon approach they take form. Curved forms coated with a mirror mosaic reflect the desert, and the passers-by. You are All so Many of Me by Michael Emery shines from a distance, and creates a fractal of the viewer's face up close. Much, much farther away, a white blip becomes a filigreed Capitol building with a latticed, domed roof. A cross between a ladder and a swing leads up to the second level, where a circular balcony allows for a lift, and a view. [Altered State by Kate Raudenbush] Visible in the distance is a giant truck appearing to stand alone, towering over the midget people standing beside it. [Bummer by Myk Henry] 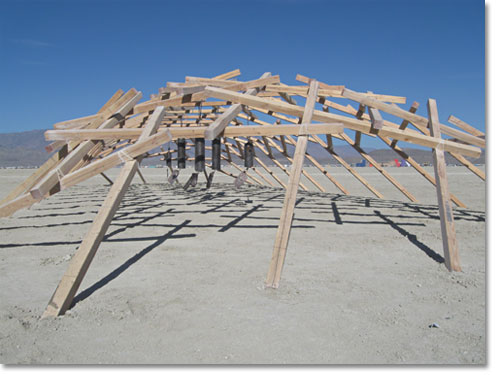 Leagues further on, a collection of two by fours supports an assortment of heavy bells that create a heavenly wind-driven ringing. The wind and the bells, a duet in the midst of the playa, enchant the imagination. Click here to listen to the sound of the bells. 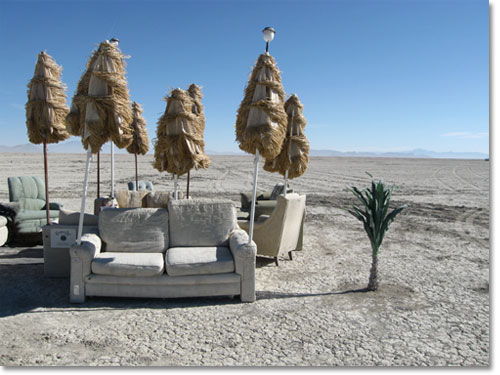 Oasis in the desert, a coffee sanctuary

Farther and farther out, at last was found a traveler's respite. A mirage of rafia umbrellas rustling in the breeze and comfy couches, this oasis was rumored to serve iced coffees daily at 1 pm. Complete with coffee table, a guest book, and coffee table books, including The Soul of Rumi by Coleman Barks, this welcome site refreshes the body and the soul.

Ten story building in the middle of the Playa

Fortified, and filled with a compulsion to find the edges of such a vast expanse, one might go all the way out to the orange perimeter. Out here, an encounter with anyone can seem like a fever-dream. The Black Rock City Rangers patrol the area to prevent incursions from gate-crashers, and also to protect the health and welfare of those who venture out this far. The Rangers are volunteers who "address safety concerns, mediate disputes, and resolve conflicts when they cannot be resolved by the persons involved." (Ranger Training Manual) Considering the size of the Burning Man event and the rarity of serious problems, their organizational and training skills are to be admired.

"Be sure to see the ten-story Tower" a Ranger, looking like a mirage himself, said out there. "It was made by a guy whose father passed away. His father and grandfather came to this country and became builders." The American Dream indeed. The Tower was also on the way back in, a good direction to go in at the time. That might have figured in his suggestion. 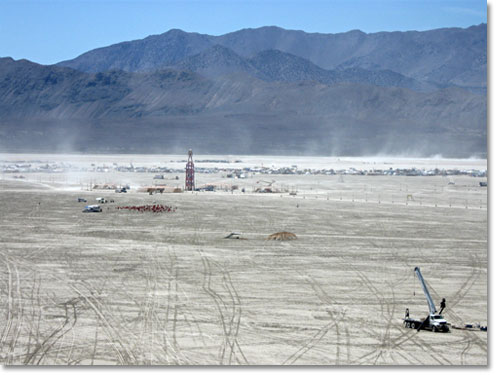 View from the top of the ten story building. The tall figure visible in the center of this photo is the Man, pre-burn.