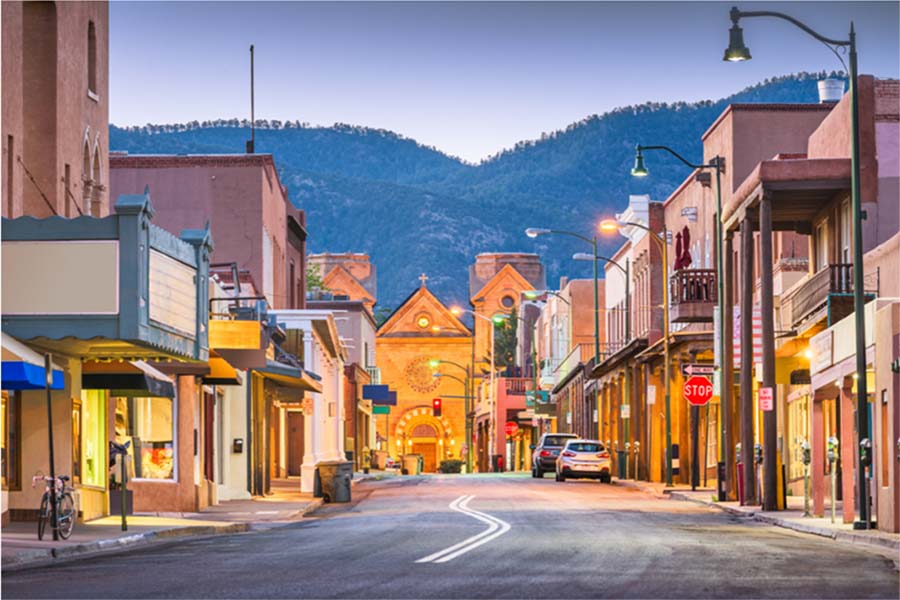 Santa Fe is the site of both the oldest public building in America -- the Palace of the Governors -- and the nation's oldest community celebration -- the Santa Fe Fiesta, established in 1712 to commemorate the Spanish reconquest of New Mexico in the summer of 1692. Readers of Conde Nast Traveler magazine have picked Santa Fe as the best travel destination in the world.

Santa Fe (meaning the Holy Faith) is an ancient city nestled at an elevation of 7000 feet in the foothills of the Sangre de Cristo mountains. Santa Fe was founded by the Spanish in 1610, more than 400 years ago. It is the oldest capital city in the United States. The culture of the Pueblo people of New Mexico predated the European settlement of Santa Fe by 12,000 years.

The high desert of Santa Fe and Northern New Mexico became part of the United States less than 200 years ago, in 1848. Since that time, the area has diversified, and Santa Fe is a modern American city. Still, the Native American and Spanish cultures remain a vital part of Santa Fe's character, interweaving the old with the new, creating a rich, often mystifying effect. 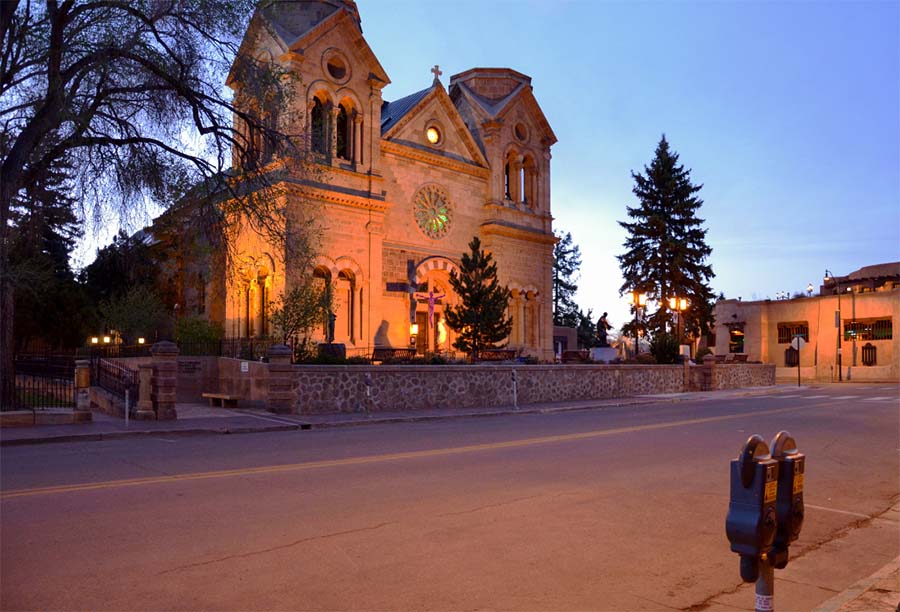 Cathedral of St. Francis of Assisi, just off the Plaza

The population of Santa Fe has grown by 26% since 2010, reaching 85,626 in 2021. The combination of a centrally located, sophisticated urban setting with access to a wealth of cultural opportunities and a rich, well preserved history have drawn many to the city. For artists, it is additionally the indescribable beauty of the physical surroundings that keeps them in love with this colorful city.

Santa Fe is known for its many world class museums, shops and boutiques, art galleries, and wide range of entertainment from opera and dance to theater to music which can keep visitors busy both day and night. Much of what Santa Fe has to offer is located within the historic downtown area, which has a definite European vibe, and can be covered easily on foot. Strict construction guidelines mandate the territorial and Spanish colonial architecture that characterizes the Santa Fe style. City codes allow no high rises to block the mountain views. 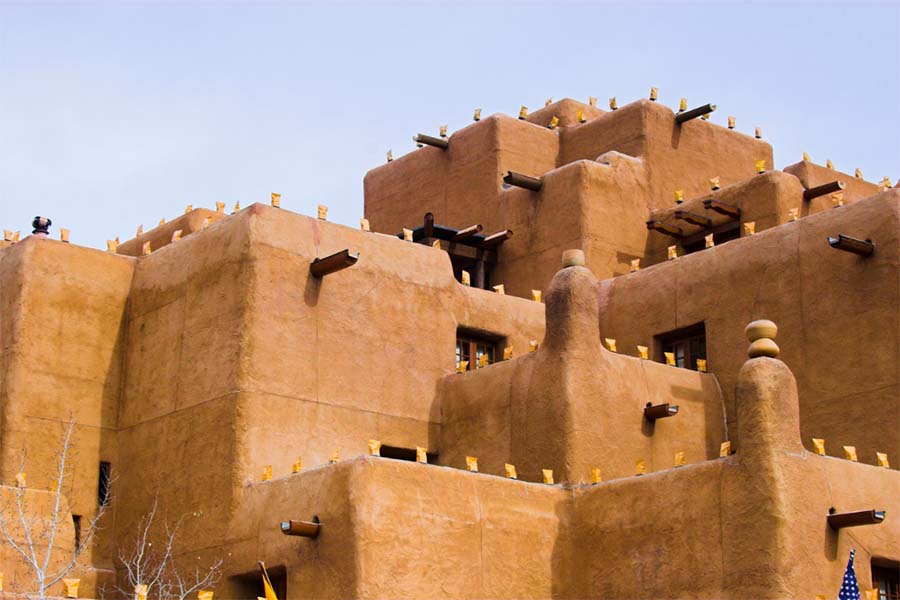 For those with outdoor recreation in mind, Santa Fe is surrounded by more than 1.5 million acres of National Forest and public land which offer fishing, camping and hunting within easy reach. Hiking, biking, kayaking, backpacking, mountain climbing, cross-country or downhill skiing at the Santa Fe Ski Area, white water rafting and wind surfing are all available during the year. Golf, tennis and even bird watching are other ways to enjoy the typically sunny, temperate days.

Don Juan de Onate, the first Governor-General of New Mexico, established his capital in 1598 at San Juan Pueblo, 25 miles north of Santa Fe. Thirteen years before Plymouth Colony was settled by the Mayflower Pilgrims, Santa Fe, New Mexico, was established on a very small scale in 1607.

Don Pedro de Peralta succeeded Onate in 1609 and moved the capital to present day Santa Fe within the year. Peralta and his men laid out the plan for Santa Fe at the base of the Sangre de Cristo Mountains on the site of the ancient Pueblo Indian ruin of Kaupoge, or "place of shell beads near the water."

For a period of 70 years beginning the early 17th century, Spanish soldiers and officials, as well as Franciscan missionaries, sought to subjugate and convert the 100,000 Pueblo Indians of the region. In 1680, Pueblo Indians revolted against the 2,500 Spanish colonists in New Mexico, killing 400 and driving the rest back into Mexico. The conquering Pueblos sacked Santa Fe and burned most of the buildings, except the Palace of the Governors. Pueblo Indians occupied Santa Fe until 1692, when Don Diego de Vargas reconquered the region and entered the capital city after a bloodless siege.

When Mexico gained its independence from Spain, Santa Fe became the capital of the province of New Mexico. The Spanish policy of closed empire ended, and American trappers and traders moved into the region. William Becknell opened the 1,000-mile-long Santa Fe Trail, leaving from Arrow Rock, Missouri, with 21 men and a pack train of goods.

For a brief period in 1837, northern New Mexico farmers rebelled against Mexican rule, killed the provincial governor in what has been called the Chimayó Rebellion and occupied the capital. The insurrectionists were soon defeated, however, and three years later, Santa Fe was peaceful enough to see the first planting of cottonwood trees around the Plaza.

When New Mexico gained statehood in 1912, many people were drawn to Santa Fe's dry climate as a cure for tuberculosis. The Museum of New Mexico had opened in 1909, and by 1917, its Museum of Fine Arts was built. The state museum's emphasis on local history and native culture did much to reinforce Santa Fe's reputation as an historic city.

Of the 19 Native American communities located in New Mexico, eight are near Santa Fe. All these eight are Pueblo Indian tribes. Throughout the year, the Pueblo communities surrounding Santa Fe hold special dances, feast days and celebrations open to the public. To find out more about the eight Pueblos and their events, click here.

Nights are cool year-round in this high desert city. Santa Fe usually receives six to eight snowfalls a year between November and April. Its heaviest rainfall occurs in July and August. Santa Fe has 300+ days of sunshine a year and has an average relative humidity of 50%.

Hotels/Motels - There are hotels and motels in Santa Fe with something for every taste and price range. For more information and a complete list, click this link for hotel rates, availability, customer reviews and reservations online.

Santa Fe has more events and acitvities than any other city in the Desert Southwest. Two of the most popular events during the summer in Santa Fe are the Indian Market and the Spanish Market.