Underground caves and caverns represent some of the most unique, fascinating (and cool) features of the North American deserts. Many varieties of caves occur in all of the deserts of the Southwest, but are most common in limestone mountains where conifers abound.

Such is the case with the two of the most famous caves known in the Desert Southwest, Carlsbad Caverns in southern New Mexico and Lehman Caves in eastern Nevada. These limestone caverns are now protected and managed by the National Park Service.

Inside the Big Room in Carlsbad Caverns

Most caves are created by erosion, usually when rain water, slightly acidified by carbon dioxide in the soil, seeps downward through cracks and crevices in layers of limestone. This mild acid gradually dissolves small passages, and as rainwater continues to enter the system and more limestone is dissolved, the micro-caverns are enlarged forming caves. With changes in groundwater levels, underground caverns sometimes collapse, creating sinkholes. Geologists call this karst topography. Features created in caves after their formation are called speleothems, usually occurring when dissolved limestone solidifies.

In desert areas of pseudokarst, water erosion can create caves in gypsum formations (gypsum caves) and in shale "badlands" (mud caves), as well as within cracks between granite boulders (granite/talus caves). Caves can also be formed by wind erosion (wind caves), by the action of the sea against the shore (littoral or sea caves) and in glaciers or high-mountain snow fields (ice caves). Rivulets of volcanic lava often cool and solidify on the exterior, while the hot, plastic interior continues to flow and evacuate itself, creating lava tubes.

In 1988, the US Congress passed the Federal Cave Resources Protection Act directing the Departments of Interior and Agriculture to inventory and list significant caves on federal lands, and to provide management and dissemination of information about caves.

In 1990, the Congress also directed the Interior Department, acting through the National Park Service, to establish and administer a program on cave research and to examine the feasibility of a centralized national cave and karst research institute. Based on the results of the study, a bill was introduced in the 105th Congress to establish the National Cave and Karst Research Institute in New Mexico.

Caves and karst features occur in about 60 units of the National Park System System. The number of caves ranges from as few as 10 to 15 caves in the Chesapeake & Ohio Canal National Historic Park to more than 400 caves in the Grand Canyon National Park. Many more caves are protected and managed by state and local governments, as well as private individuals and companies.

Cave and karst systems are important because most of the nation's freshwater resources are groundwater, of which about 25% is located in cave and karst regions. Caves are also repositories of information on natural resources, human history and evolution, containing anthropologic, archaeologic, geologic, paleontologic and mineralogic resources. Many caves act as natural traps for flora and fauna, and species of now-extinct animals. Cave-dwelling organisms have specialized adaptations such as extreme longevity and enhanced sensory perceptions.

Caves have always been known as repositories of archaeological material. Some of the oldest evidence about the activities of human ancestors comes from caves. In the caves of Arizona's Grand Canyon and in the lava tubes of El Malpais National Monument in New Mexico, important archaeological discoveries are made every year in the form of excavations of ancient pottery, figurines made from twigs and evidence of the use of caves for habitation. In the Slaughter Canyon Cave in Carlsbad Caverns National Park, recent studies led to the discovery of one of only three deep cave art sites in the United States.

The National Park Service (NPS) works in conjunction with the National Speleological Society (NCC) and Bat Conservation International (BCI) to secure assistance with inventories, surveys, monitoring, and exploration of caves and preservation of bat habitats.

While there are many caves in the desert regions of the Southwest, most are well-kept secrets, even when they occur on public lands. A very small number of these caverns have been opened to the public, and are administered by government agencies. A few, like California's Mitchell Caverns and Arizona's Grand Canyon Caverns, are operated by private owners. Caves that are open to the public and require no special equipment to enter, are called Show Caves.

The National Caves Association, founded in 1965, is a non-profit organization of publicly and privately owned show caves and caverns -- caves developed for public visitation. An incomplete list follows.

ARIZONA
Most of Arizona's caves and caverns occur in the limestone formations exposed near the Grand Canyon, running south to the edge of the Mogollon Rim. Discovered in 1974, Kartchner Caverns in southern Arizona east of Tucson is open for the public. It is billed as having world-class soda straws.

CALIFORNIA
Most of California's caves occur in the limestone formations of its Sierra Nevada's Kings Canyon and Sequoia national parks. Santa Cruz and Siskiuyou counties also have many caves. In the northeast corner of the state, Lava Beds National Monument has many lava tube caves open to the public.

COLORADO
Caves in Colorado tend to occur in the mountains, where limestone and conifers are abundant, rather than in desert regions of the state.

NEVADA
Nevada has lots of limestone caves in the east around the cattle drive country.

NEW MEXICO
New Mexico has many limestone caves near Carlsbad in Eddy County and in the Guadalupe Mountains. 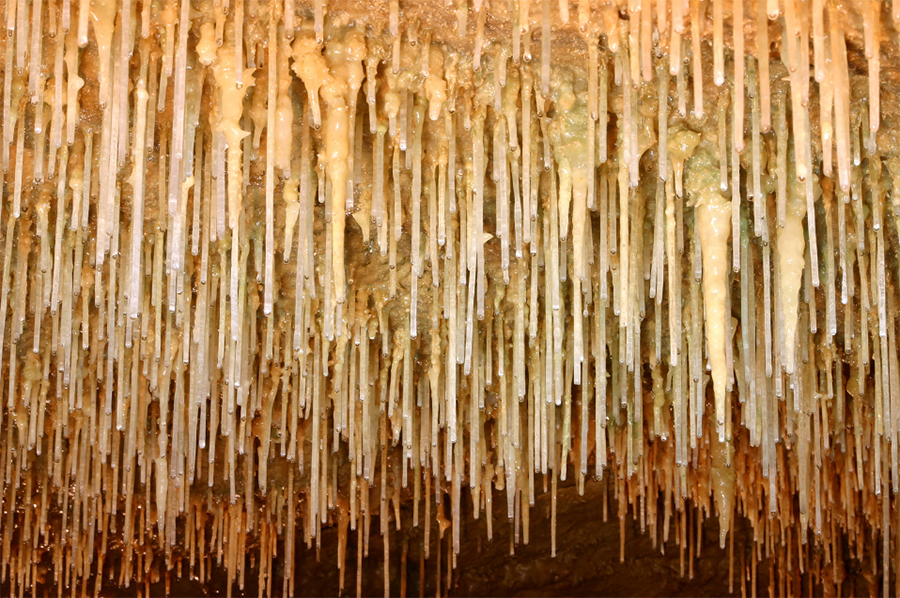 A ceiling full of the calcite formation soda straws at the Inner Space Cavern in Georgetown, Texas.

TEXAS
Sporadic desert caves occur in the desert regions of the state, some of which are in the Guadalupe Mountains.

UTAH
Utah has sporadic caves throughout the state, with a concentration in northeastern Uintah County.

The sport of caving, also called spelunking, has gained great appeal in recent years, especially at colleges and universities around the world. This sport involves exploration of undeveloped caves that are generally well kept secrets and require special equipment.

Because this activity can be dangerous, associations have been formed to further cave exploration and protect cave environments. Because caves often involve steep ascents and descents, equipment that includes mining and climbing gear are is required.

Discover the exciting underground world of Caving in the Desert Southwest.