Edward Abbey was born in the city of Indiana, in Pennsylvania, near Home, at the end of a "red dog, dirt road" on January 29, 1927. From this humble beginning in the smoky, shaggy northern Appalachian hills came one of the most powerful voices of the desert Southwest. Abbey was a writer, philosopher and artist. However, attempts to define Abbey more specifically as an "environmentalist" or "nature writer," or with any other label for that matter, always end in frustration. He was a difficult character to pin down, a loose cannon in the truest sense of the term. 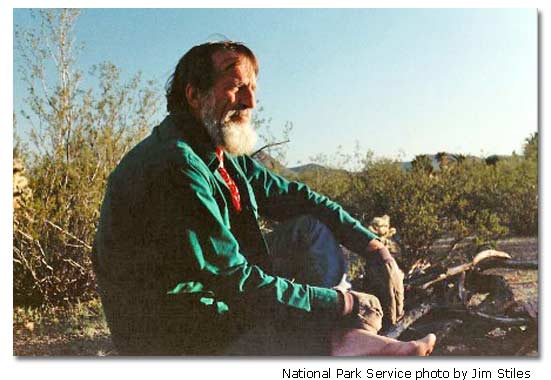 A Man of Contradiction

If nothing else, Abbey exemplified the word "contradiction." Always one to rage against the burgeoning population of the Southwest, Abbey produced five offspring with three of his five wives. An angry defender of wild nature, he often wrote of his penchant for throwing beer cans out of his pickup truck window as he traveled down desert highways. (This was not only a means of measuring distance, he said, but also a protest against the domination of nature by the machine.) Always a champion of the oppressed and marginalized, and a foe of industrializing and militarizing the deserts, he nevertheless opposed Mexican immigration into the United States. A liberal, he nevertheless opposed gun control.

Contradictions, however, formed only a small part of the man whose published books include two of the foremost titles in the environmental literature of the 20th century: Desert Solitaire and The Monkey Wrench Gang. Even with such titles to his credit, as well as another 20 or so other publications, one particular statement of his about the desert Southwest comes closest to epitomizing this man of contradictions: "I love it so much that I find it hard to talk about it."

Abbey first came to the Southwest when he was 17, during the summer of 1944, between his junior and senior years in high school. Certain to be drafted after graduation, his reasoning was that if he was going to fight and possibly die for his country, he might as well see it first. He hitchhiked through Illinois, Minnesota and South Dakota, over the Rockies and into California, working odd jobs to supplement the 20 dollars his father gave him before he set off on his adventure. While in California, he worked odd jobs, he saw Yosemite Valley and the Sierra, and then he began his homeward trek. At Needles, he learned to hop freight trains. He made it to Flagstaff before he was arrested for vagrancy. Bounced out of town the next day, he rode to Albuquerque on another freight train before homesickness and fear of some of the other denizens of the tracks pushed him into the Greyhound station to purchase a non-stop ticket home to Pennsylvania.

It was on the train that Abbey fell in love with the desert Southwest. It was an affair that would last a lifetime: "Proud of my freedom and hobohood I stood in the doorway of the boxcar, rocking with the motion of the train, ears full of the rushing wind and the clattering wheels, and stared and stared and stared, like a starving man, at the burnt, barren, bold, bright landscape passing before my eyes. Telegraph poles flashed by close to the tracks, the shining wires dipped and rose, dipped and rose; but beyond the line and the road and the nearby ridges, the queer foreign shapes of mesa and butte seemed barely to move at all; they revolved slowly at an immense distance, strange right-angled promontories of rose-colored rock that remained in view, from my slowly altering perspective, for an hour, for two hours, at a time. And all of it there, simply there, neither hostile nor friendly, but full of a powerful, mysterious promise."

Abbey Returns to the Southwest

Abbey returned to this land of powerful, mysterious promise to complete his Bachelor's and Master's degrees in Philosophy at the University of New Mexico in Albuquerque, but not before a two-year stint in the army, stationed in post-war Italy. He came out of the military as he had gone in: a private. Even though he was awarded two promotions, these were counter balanced by two demotions in rank, likely for refusing to salute various officers. He said: "'You're saluting the uniform, not the man,' they taught us in basic training. Really! I'll salute a man anytime, but damned if I'll salute an officer."

On being mustered out, Abbey was more entrenched than ever in his basic distrust of large institutions and in his belief in the supremacy of self-determination. The military bolstered the roots of his philosophic anarchism, which his father, a long time member of the International Workers of the World, or the "Wobblies," had instilled in him and which he refined for the rest of his life.

After graduation, Abbey took on many jobs with the Park Service and Forest Service as seasonal ranger and fire lookout. From the early '50's, through his sporadic seasonal employment, through the years he spent as a writer, until just a few days before his death, Abbey kept a personal journal. He detailed his days, his feelings and thoughts and emotions about the world around him. The journals were edited by a friend of Abbey's, and they can be read in the book titled Confessions of a Barbarian by Dave Petersen. 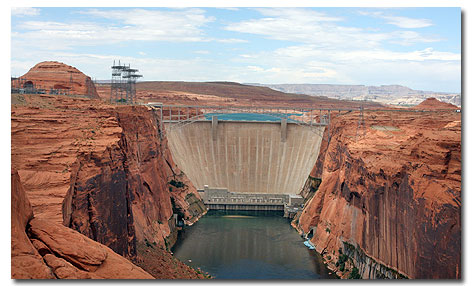 Perhaps the pivotal event that made Edward Abbey who he was occurred in 1962, when Glen Canyon Dam was first brought on line. Abbey had made two raft trips through Glen Canyon before the gates of the dam were closed. His love of the desert Southwest found its zenith in this exquisite canyon made up of narrow labyrinths with fern grottos and places with names like Music Temple and Tapestry Wall. With the closing of the gates at Glen Canyon Dam, this magical place was destroyed. Ancient Anasazi ruins and rock art, unfathomable formations and countless other sights and sounds and silence, along with the solitaire of the Eden-like canyon now lie under several hundred feet of water. Abbey found this an offense of the highest order, and it prompted him to write two books about his hatred of the dam: The Monkey Wrench Gang and Hayduke Lives. In a roundabout way, the "radical environmental movement" resulted from the 1975 publication of The Monkey Wrench Gang. Dave Foreman and several others were inspired by the message of the book and formed the group Earth First! with Abbey's story in mind.

Abbey wrote about his love of freedom and how he found it in the landscapes of the desert Southwest. A trip through Arizona and southern Utah is a trip through "Abbey's country." From Atascosa Peak near the small town of Arivaca in the southernmost reaches of Arizona to Moab, Utah, and on to Arches National Park and beyond, to the Colorado Plateau and Sonoran Desert—that was home to Abbey and his friends and cronies until March 14, 1989, when he died.

Doug Peacock, author of the book The Grizzly Years and Abbey's inspiration behind the character George Washington Hayduke in The Monkey Wrench Gang, along with two or three other close friends, put Abbey's body, wrapped in his old sleeping bag, into the back of a pickup truck and drove him out into the desert he had loved and they buried him there. Instructions Abbey had written a few years earlier, when he was misdiagnosed with a fatal pancreatic ailment, were followed to the letter: "No formal speeches desired, though the deceased will not interfere if someone feels the urge. But keep it all simple and brief. And then a big happy raucous wake. Music! Bagpipes! And a flood of beer and booze! Lots of singing, dancing, talking, hollering, laughing, and lovemaking. And meat! Beans and chili! And corn on the cob."

As far as a personal philosophy was concerned, anarchical sentiments aside for the moment, a quote from his classic Desert Solitaire serves as a summary of Abbey's feeling about the desert Southwest: "Do not jump into your automobile next June and rush out to the Canyon country hoping to see some of that which I have attempted to evoke in these pages. In the first place you can't see anything from a car; you've got to get out of the goddamned contraption and walk, better yet crawl, on hands and knees, over the sandstone and through the...cactus. When traces of blood begin to mark your trail you'll see something, maybe."

Abbey was indeed a difficult man to define, even by his own admission. There were many levels to his existence, and only by long study could anyone hope to come to even remotely understand the workings behind his thought. By most who knew him, however, he was quiet, generous and gracious, the opposite of the persona attributed to him by his reading public. His words of benediction give us the opportunity to see this side of him: "Benedicto: May your trails be crooked, winding, lonesome, dangerous, leading to the most amazing view. May your mountains rise into and above the clouds. May your rivers flow without end, meandering through pastoral valleys tinkling with bells, past temples and castles and poets' towers into a dark primeval forest where tigers belch and monkeys howl, through miasmal and mysterious swamps and down into a desert of red rock, blue mesas, domes and pinnacles and grottos of endless stone, and down again into a deep vast ancient unknown chasm where bars of sunlight blaze on profiled cliffs, where deer walk across the white sand beaches, where storms come and go as lightning clangs upon the high crags, where something strange and more beautiful and more full of wonder than your deepest dreams waits for you—beyond the next turning of the canyon walls."

Abbey, Edward. "Hallelujah on the Bum," The Journey Home: Some Words in Defense of the American West. New York, NY; Dutton, 1977.