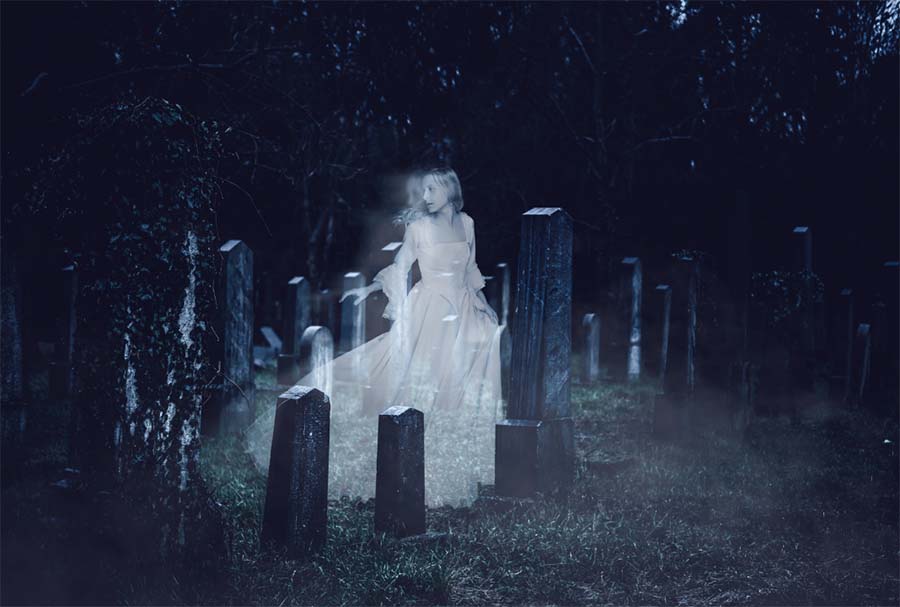 Spooky stories, unexplained mysteries and tales of ghosts are part of desert lore. It is no wonder that so many ghosts haunt the lonely trails, mountains, and landmarks of the forbidding desert. The desert can be so unforgiving and, at the same time, unbelievably generous. Many travelers, prospectors and adventurers have gone into the desert, never to return or be seen again. Others have returned with gold nuggets and treasures so rare and unique that we could only dream of being so lucky ourselves.

DesertUSA has pulled together some haunted stories from our past issues to share with you. So sit back, hold on to your chair and take a virtual tour of the "Haunted Desert."

We will start our tour with the famous ghosts and haunts of The Anza-Borrego Desert State Park.

Anza-Borrego Desert State Park and the Borrego Springs area of California are notorious for the many legends, ghost stories and unexplained phenomena occurring there over the years. The region of the Sonoran Desert is home to the Vallecito Stage Station and Yaqui Well, in addition to the mysterious "Ghost Lights" of Oriflamme Mountain.

In her wedding gown, she paced the adobe floor of the Vallecito Station (Anza Borrrego Desert) patiently waiting for the next stage, which would take her on to Sacramento. Her fiancé had struck it rich in the gold fields and had sent for her to join him in California. It is said that if you camp near the old Vallecito Stage Station, you too will see "The Lady In White" restlessly pace the worn earth where the station once stood, waiting for her stage to come.

The Phantom Stage of Carrizo - It is said that a phantom stage forges it way through the Carrizo Wash and passes through the original location of the Carrizo Stage Station located in Anza Borrego Desert State Park.

The White Ghost Horse of Vallecito - There is a tale of a white ghost horse who continues to haunt the Vallecito Station looking for his master who was murdered in a gun fight and shot dead from his back.

The Ghost Lights of Borrego - Mysterious and unexplained lights have been seen since 1858 on Oriflamme Mountain in Anza Borrego Desert State Park. Reports have been made over the years. The accounts are always slightly different, but the general description of the sightings is the same.

The Eight-Foot Skeleton - If you find yourself between the Superstition Mountains and Seventeen Palms you may encounter a skeleton ghost wandering the desert carrying a lantern. Many accounts have been made over the years of similar sightings in the same area.

Ghost Dancers at Yaqui Well - During the warm summer nights when a full moon rises in the desert sky ghost dancers have been seen at Yaqui Well in Anza Borrego Desert State Park. The ghosts are emigrants who were traveling from Yuma, AZ to California. They died at the well site. It is only during the hot summer nights of the full moon that the three emigrants return to Yaqui Well. One rises out of the muddy waters of the Yaqui Well, one emerges from the brush nearby, and the third arrives in a cool breeze out of the wash. The ghosts join hands and circle Yaqui Well in a dance. Soon after the twirling begins, they disappear, leaving only the good waters of the well and a slight chill in the air.

On a trip to southeastern Arizona, you just might want to bring your infrared film, an open mind, and plan to spend a night or two in Tombstone.

Tombstone, AZ is home to many ghosts and haunted places. The famous Birdcage Theater has had hundreds of visitors recount hearing people singing and talking in the box seats above the stage. There are dozens of testimonies by both tourists and employees of the theatre of seeing people wearing clothing from the 1800's, and numerous sightings of a man wearing a visor walking across the stage.

A number of other buildings in Tombstone are also haunted. There have been sightings of ghosts in the Boot Hill Cemetery, The Aztec House Antique Shop, Big Nose Kate's Saloon, Nellie Cashman's Restaurant, the Wells Fargo Bank Building, and Shieffelin Hall to name a few. Read more about Tombstone's ghosts.

Other Haunts and Legends of the Desert Southwest

Dragoon Mountains
Between the Dragoons and the town of Wilcox, Arizona, a phantom train makes its trek across the plains. This phantom locomotive has been both seen and heard by scores of people throughout the years. Trouble is, there never was a train that ran these parts, and there is no track. It is known as the Phantom Train of Dragoon.

The Legend of the Lady in Blue
Of all the tales of lost treasure, ghosts, inexplicable lights, apparitions, spirit horses, unsolved murders and disappearances across the Southwest, the legend of María Jesus de Ágreda - the fabled "Lady in Blue" or "Blue Nun" - surely ranks among the most strange and mysterious of them all. A Spanish nun who, physically, never left her convent in her country's province of Soria, she nevertheless purportedly traveled by spirit - a phenomenon called "bi-location" or "teleportation" by the Church - to minister to Indians in Arizona, New Mexico and western Texas. She left an enduring mark on the folklore of the desert. More... read the whole story.

Bisbee
Located in the copper mining town of Bisbee, the Clawson House Inn claims four ghosts. Mrs. Clawson is said to haunt the grounds, as well as three miners who were murdered at the small inn in the 1890s. Besides the Clawson ghosts, the Oliver House Bed and Breakfast is the residence of five spirits. Originally a mine office, this building became a boarding house and a colorful history evolved. Reportedly, most of the ghostly activity takes place in the area surrounding Room 13.

Jerome, AZ
There is a good reason that Jerome is known as a ghost town. A number of buildings in the town are haunted, so if you are up for a day of ghost hunting, this would be a good place to look. The United Verde Hospital on Cleopatra Hill is loaded with apparitions and inexplicable noises. Moans and other frightening sounds reverberate through the hallways, and ghostly figures float through the corridors.

Phelps Dodge Mine near Jerome State Historical Park is home to Headless Charlie, the ghost of a miner who apparently "lost his head." The Community Center has so many ghosts that it is locally known as Spook Hall. The Old Company Clinic houses ghosts of former patients, doctors and nurses. And often, just around dusk, a phantom spirit is seen standing in doorways of the Old Episcopal Church.

Phoenix
In 1928, 22-year-old Leone Jensen, distraught over a broken love affair, jumped to her death from the roof of the then new San Carlos Hotel on North Central Avenue. Her white, floating form still roams the grounds. There are also reports of children running through hallways, and the sounds of laughing children coming from within the rooms. This might be explained by the fact that the hotel was built on the site of the first elementary school in the city.

Rhyolite
The ghost of Tom Kelly has been seen in the Bottle House of the once prosperous mining-town-turned-ghost-town Rhyolite, Nevada. Several other spooks make their presence known here at times, especially around the empty vault at the old ruins of the Cook Bank Building. Rhyolite is approximately 85 miles northwest of Las Vegas off U.S. Highway 95 on Highway 374. Also worth a view are the ghostly sculptures of Albert Szukalski, life-sized figures draped in white, strange and profound, especially against their backdrop of the Mojave Desert. They inspired the creation of the Goldwell Open Air Museum, filled with wonderful, enigmatic art pieces.

Santa Fe
Santa Fe is another city loaded with ghostly lore, almost too numerous to list. Hauntings are reported at the La Posada Hotel on East Palace Avenue, the Night Sky Gallery on Canyon Road, the Laguna Pueblo Mission, the Grant Corner Inn (especially Rooms 4 and 8), the Church of San Miguel, the La Fonda Hotel, the Three Sisters Boutique and the Legal Tender Restaurant and Saloon located in the central part of town. A phantom headless horseman is reported to roam Alto Street, riding down to the Santa Fe River.

Shiprock
Along U.S. Highway 666, also known as the Highway to Hell, a ghost car has appeared during full moons and reportedly run other cars off the road. Another apparition of a mad trucker roams the highway, and the phantom of a girl in a nightgown vanishes from sight when motorists stop to help her. Extra caution should be taken when traveling on this spooky route.

The Loretto Chapel's Miracle Staircase
In the year 1852, seven nuns of the order Sisters of Loretto at the Foot of the Cross chose to answer Father Jean Baptiste Lamy’s call to help bring education to the impoverished, Spanish-speaking children of the desert Southwest. As they left their convent — their Motherhouse — in central Kentucky, the nuns certainly knew that Lamy, appointed by the Vatican, had been dispatched to Santa Fe to assert ecclesiastical authority over the Southwest, a region recently conquered by the United States in the Mexican/American War. They could scarcely have anticipated, however, the hardships they would endure, the educational challenges they would face, or a certainly marvelous — perhaps a miraculous staircase — their efforts would yield. Click here to read the whole story.

Death Valley
The ghost of old Joe Simpson, hanged by a lynch mob for murdering the town banker, wanders what is left of the town Skidoo. The only items marking this gold mining town now are a cemetery, a mill, the abandoned mines.... and Joe. Skidoo is located off California Highway 190 south of Stovepipe Wells.

Hollywood and Los Angeles - Mark Masik’s “Hollywood Remains to Be Seen” is the definitive guide to the final resting places of Hollywood’s elite. Detailed walking tours lead you to the graves of hundreds of stars. Read more

Joshua Tree
Besides being a lively area for UFO sightings, ghostly apparitions have been reported wandering the the sacred Wind Cave near Barker Tank in the Moronga Valley.

Mojave
Quite a different ghostly tale, there is a phantom of a very large 7-foot-high deer that has been spotted time and again by hunters in the Kelso Valley area. This giant stag makes no sound and leaves no footprints.

Nine miles east of Marfa, Texas out on the Chihuahuan Desert at the base of the Chinati Mountains, people gather to watch small, ethereal lights floating through the night air with no apparent source or explanation.

The Ghost Lights of Marfa, as they are now called, were first reported more than a century ago when Robert Ellison, one of the area's first settlers, witnessed these mysterious glowing orbs in 1883. But they apparently existed before that, for the local Apache are said to have believed the eerie lights were stars dropping to earth. More...