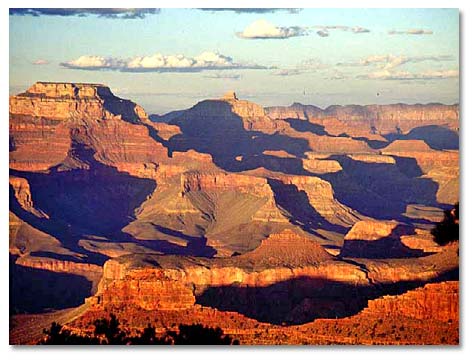 "Keep it for your children and your children's children, and for all who come after you, as one of the great sights which every American, if he can travel at all, must see."

-- Teddy" Roosevelt on the Grand Canyon

Theodore "Teddy" Roosevelt was the colorful and dynamic personality who dominated the American political landscape from 1900 until World War I. He became the 26th president of the United States following the assassination of William McKinley in 1901.

Roosevelt was the first conservationist president. He established the National Wildlife Refuge program, and was largely responsible for establishment of federal control and regulation over public lands of the West. He created many desert national parks and monuments, including the Grand Canyon, Mesa Verde, Montezuma's Castle and the Petrified Forest.

Born into a wealthy New York City family on October 27, 1858, Roosevelt grew up a sickly child, suffering from asthma and bad eyesight. But as a young man, he devoted himself to vigorous exercise, gaining a physical stamina and love of outdoor sports that became a hallmark of his character. His promotion of the "strenuous life" was his lifelong preoccupation.

He also developed an early interest in nature and animals. As this keen interest increased, he collected thousands of specimens for museums and scientific study. He was considered one of the leading field biologists of his day and was the author of many books and articles on natural history.

Although not formally educated at a public school, Roosevelt attended Harvard where he lost the sight in one eye as a member of the boxing team. When he graduated in 1880, he married Alice Hathaway Lee. The next year, at the age of 23, he was elected to the New York State Assembly, where he became a leader among the minority of Republicans who pressed for social reform through government regulation.

After both his wife and mother died on Valentine's Day 1884, Roosevelt headed west to the Dakotas where the isolation and immensity of the Badlands helped him escape these misfortunes, and offered a retreat where he could pursue his interest in writing.

In 1886, he married his childhood sweetheart, Edith Kermit Carow, and continued his literary career from their home, Sagamore Hill, near Oyster Bay on Long Island, New York.

Roosevelt returned to politics as a Republican reformist in 1889, serving on the U.S. Civil Service Commission. In 1895, he became New York City Police Commissioner, and two years later, he was appointed Assistant Secretary of the Navy, becoming a leading proponent of war with Spain. When war came in 1898, Roosevelt resigned from government and helped organize the "Rough Riders," a cavalry force of "cowboys and college graduates," as he put it. He led the 1898 charge up the smaller Kettle Hill in the greater battle for San Juan Hill, near the city of Santiago, Cuba.

Home from the war a hero, Roosevelt was elected governor of New York in the fall of 1898, then ran as the Republican Party's vice presidential candidate in 1900. Less than a year later, on September 14, 1901, the assassination of President William McKinley made the 43-year-old Roosevelt the youngest president in history. During the next seven years, he promoted social and governmental reforms, often relying on his executive authority to implement programs that were rejected by the conservative forces controlling Congress. He became known as a "Trust Buster," revising the Sherman Anti-Trust Act to break up some of the nation's largest corporations, including the railroad and steel industries. His imperialistic foreign policy was another hallmark of his political career.

T.R., as he was called, had always been fascinated with the Far West, where he had spent many happy years on his North Dakota ranch writing and hunting big game. He had also visited California's Yosemite Valley and Arizona's Grand Canyon with naturalist John Muir.

As president, the conservation of the West's natural resources became one of Roosevelt's primary concerns. Acting under the Forest Reserves Act of 1891, he withdrew 235 million acres of public timberland from sale, to set aside as national forests.

In 1905, Roosevelt gave Gifford Pinchot, a college-trained forester, responsibility for administering this new wilderness domain, as head of the newly organized U.S. Forest Service. Pinchot argued that natural resources of the West required scientific management to prevent their destruction by private developers,

Pinchot launched the modern era of western land management, which aims at sustained efficient use of natural resources rather than exploitation and development. Under Pinchot and his successors, much of the West's public lands came under federal regulation, subordinating local communities and business interests to the federal bureaucracy.

The National Reclamation Act of 1902 authorized western irrigation projects paid for by the sale of land in 16 semiarid states. Under this law, Roosevelt initiated the construction of western dams, and the task of reclaiming the desert Southwest was started.

Roosevelt initiated similar conservation reforms in the West with his use of the National Reclamation Act (Newlands Act) of 1902. This law provided the federal government with responsibility and funding for dam construction and irrigation projects through the sale of public land in 16 semiarid states. Roosevelt established a new federal agency, the Reclamation Service, to bring scientific expertise and bureaucratic administration to water in the West. By 1906, water projects were underway in all of the western states, which established federal control of this vital Western resource as well.

Roosevelt also used the 1906 Antiquities Act to extend federal control over the West's scenic wonders. Although the law had been enacted to protect Native American artifacts and relics, which were being systematically looted from archeological sites, Roosevelt expanded its use to preserve historic landmarks.

By a Presidential Proclamation in 1908, he set aside 800,000 acres in Arizona as the Grand Canyon National Monument to protect it from developers. It took another 12 years before U.S. Congress acquired the political will to establish Grand Canyon as a national park.

In the same manner, Roosevelt created 16 national monuments, 51 wildlife refuges and five new national parks, preserving Crater Lake in Oregon and the Anasazi ruins of Mesa Verde, Colorado. The National Park Service (which administers national parks and monuments today) eventually grew out of the National Forest Service, paving the way for federal management of our "national treasures" sustaining their use by the West's growing tourist industry.

In 1908, Roosevelt called a conference on the conservation of natural resources to the White House. He invited governors, university presidents, businessmen and scientists to establish policies to preserve the nation's resources for the future. A National Conservation Commission was created as a result of this conference, and 41 states subsequently established conservation commissions.

Roosevelt declined to run for another term as president, deferring to William Howard Taft in 1908. He later regretted this decision but failed to unseat Taft by running under the Reform Party's Bull Moose Ticket.

After World War I, Roosevelt was poised to make another run for the White House, but on January 6, 1919, he died unexpectedly in his sleep at home in Sagamore Hill.