Strange Art in the Texas Desert 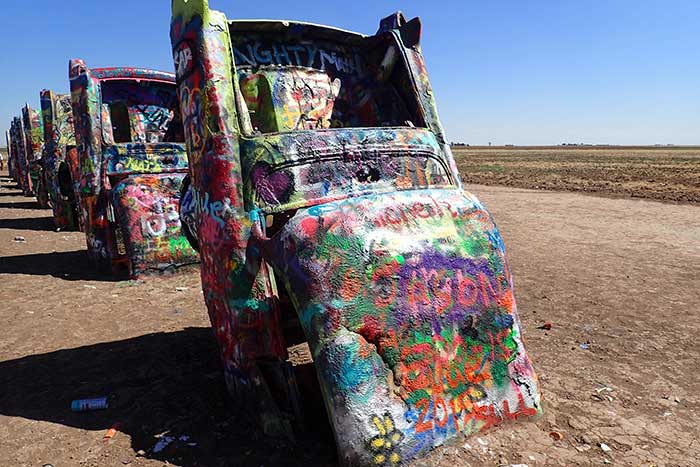 We had been driving for 12 hours, making good time through Texas on Highway 287 South heading towards the Mexican border when Spencer told me he had a “surprise detour.” The sun was setting on a long day and we were running low on snacks, so I was reluctant. But a road trip is either a modern adventure, or a slow way to get from point to point. Surprise detours put it in the first category, so we exited our original plan and turned onto old Route 66 following signs for Cadillac Ranch.

On this stretch of road that extends from the Northwest Texas State line down to Amarillo, you’ll pass through geography ranging from grasslands to high plains. Native plant life has mostly been replaced by grazing vegetation that feeds the herds of cattle dotting the landscape. The sky is bright and endless, the fields on either side of the highway might stretch forever. We cruised easily through the day taking turns at the wheel and enjoying the scenery. We were pushing on to attend the annual Hub City BBQ Cook-off in Lubbock, Texas in time for dinner. But first, Cadillac Ranch.

Pulling up to the parking lot it’s clear that this unusual sculpture gets moderate daily traffic. It might be slightly out of the way from the main interstate, but that only adds to the draw. People walk around with cameras and bottles of spray paint (painting the cars is both legal and encouraged). Children play hide and go seek, running between the cars, and license plates from across the country are visible on vehicles parked along the road. What a strange and wonderful place.

Route 66 is notorious in part for its nostalgic charm and unique roadside memorabilia. This spectacular art structure fits right in with the fun kitsch of the genre. Cadillac Ranch is a large art installation consisting of a series of 10 old colorfully painted Cadillacs sticking out of the ground in a perfect line. The story goes that the builders set these cars in the ground at the same angle as the Great Pyramid of Giza in Egypt, and the viewer does get a sense of calm and order amongst the hectic overlay of spray paint. 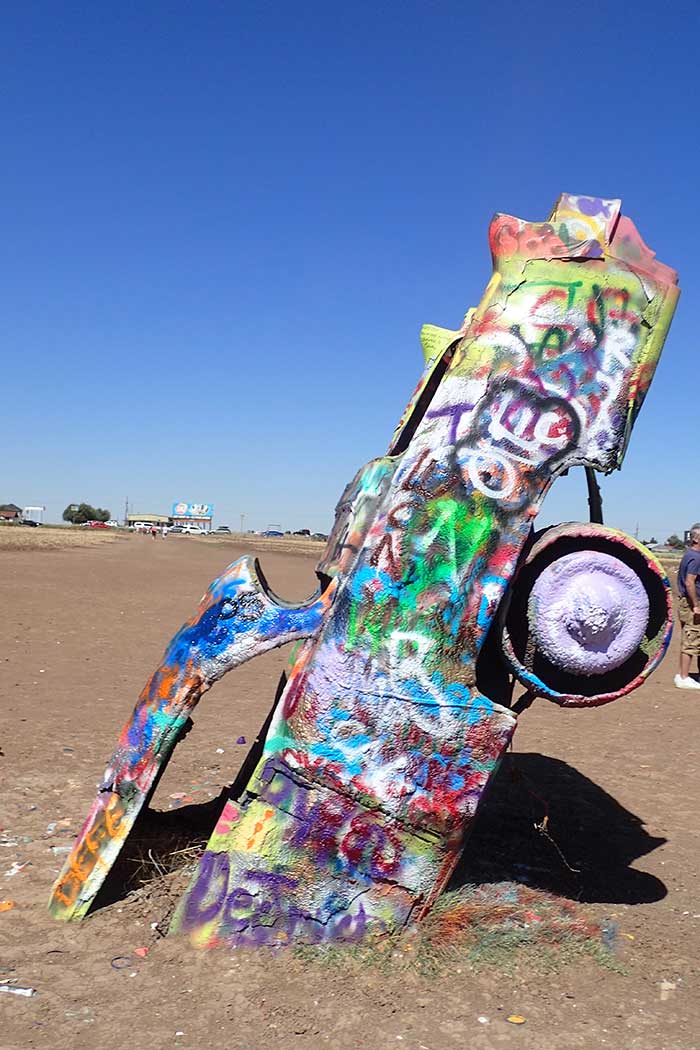 How does a concept like this originate and unfold? The idea of sticking 10 cars in the ground in a random field in Texas was hatched under the creative vision of two architects and one artist from San Francisco who called themselves “The Antfarm”. They wanted to pay homage to the rise and fall of a specific feature on Cadillac, the tail fin. The tail fin was a notable part of the Cadillac design from 1949 to 1963. The site was erected in 1974 with funding from local Amarillo businessman Stanley Marsh 3, who said before agreeing, “I’m not saying yes, and I want to think it over, but it seems inevitable, it seems fun.” Marsh assumed that the art installation would be temporary, but as word spread, the site quickly became a popular roadside attraction for those traveling historic Route 66. The cars were originally set up about two miles west of where it stands today, but was moved back in the late 90s as the nearby city started to develop and expand. Today, the cars are clearly visible from the road, but that doesn’t mean simply driving by is enough to give you a sense of this place. In order to truly understand the bizarre nostalgia of this American icon, you must stop and park. 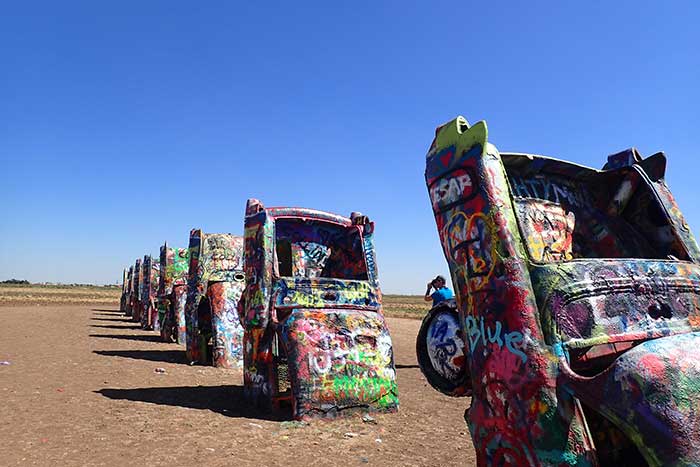 Walking up to the Cadillacs, you quickly see that there is nothing else around except for the cars and the vacant field that they are located in. This makes the hectic colors stand out clearly, and the scene is a compilation of onlookers – from children who find this to be an ideal playground, to an older generation who notably recognize a past era of automobile design. What can be said of ten Cadillacs sticking out of the ground at matching angles in an empty field? There’s no obvious reason for it to exist, which is what makes it a wonderful piece of American art. We spent an hour walking around the cars, taking pictures, and watching as people added their own graffiti art to the layers of existing color. The sun was setting and the shadows were long. As we made our way back to our own car I noted how plain the unmarked paint was, without even a single streak of red or blue to give it character. We rolled the windows down and turned the radio on, looking briefly in the rear view mirror as the cars of Cadillac Ranch slowly faded out of sight into the horizon.

Visiting: Cadillac Ranch is a public exhibit, and is open 24 hours a day, 7 days a
week. From Amarillo, take Highway 287-S to the Highway 40 Frontage Road.
Create your own artistic memory - spray painting the cars is both legal and encouraged.

Erin Lizzo is a freelance travel writer who focuses on unique destinations in the American Southwest. She splits time between Oaxaca, Mexico and Missoula, MT with her husband and their 11 year old black lab. She encountered Cadillac Ranch on a road trip down to Oaxaca Mexico and was immediately intrigued.