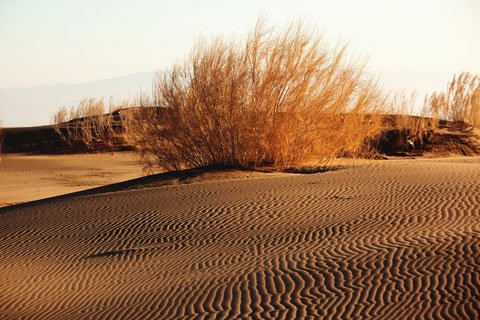 The homely-looking saxaul, roughly the size of the typical tamarisk, or salt cedar, ranks as one of the most important and useful native plants in the arid region from the Caspian Sea eastward across the Gobi Desert.

Characteristics of the Saxaul Tree

The mature saxaul usually stands about six to perhaps 12 feet in height. Both its trunk and branches are heavy and coarse, crooked and knotty, with a thick, sponge-like, water-saturated bark. The mature plant has a succulent root system that reaches out extensively for water, both laterally and deeply, with more success in sandy than in heavily textured soils. The mature plant produces minuscule yellow flowers. It has leaves so small that they may not be readily apparent-- an adaptation that helps minimize the loss of moisture through evaporation in the desert environment. According to authorities, A. Shahbazi, K. Nosrati, and G. R. Zehtabian, the saxaul uses its succulent stems for photosynthesis. The mature saxaul has a dull gray trunk and branches. The young saxaul has vivid green and pendulous, or hanging, branches.

The distribution of the saxaul (Haloxylon ammodendron) extends from Iran and Central Asia eastward across the Gobi Desert, and that of the black saxaul (Haloxylon aphyllum) and the white saxaul (Haloxylon persicum), across Iran and Central Asia. The saxaul grows -- sometimes as the only shrub or tree -- in harsh habitats such as moving or fixed sands, saline depressions, dry canyons, clay and rock submontane planes, rocky hill and mountain slopes and tertiary badlands. The Haloxylon ammodendron grows in all five ecoregions of the Gobi Desert. In southern Mongolia alone, saxaul forests have covered millions of acres of land.

Typically, the saxaul flowers in the late summer into the fall, and it produces mature seeds by the end of the winter season. Its seeds scatter through the summer, beginning a rapid germination, if conditions are right, in the early fall. Unlike many desert plants, the seeds have relatively brief viability, less than a year, in unfavorable conditions.

Under favorable conditions -- for instance, along a desert drainage -- a "forest" of saxaul shrubs or small trees may develop, and an individual plant may live for several decades. Under more harsh conditions, widely scattered stands of saxaul develop as the dominant plants in a region.

The saxaul serves a number of purposes across its range. For instance:

Over the past several decades, saxaul forests have shrunk dramatically in many areas across its range both in terms of coverage and growth rate. It is apparently suffering as a result of climate change, which may be increasing the desert's aridity beyond even the saxaul's tolerance. Undoubtedly, the saxaul has declined because growing human populations are turning more and more to the plant's wood for fuel in lieu of increasingly expensive coal and petroleum-based products.

The saxaul has become a dwindling resource for humans, livestock and wildlife. Its disappearance opens the way for the erosion of fragile desert soils, decreased natural control of water supplies, and an acceleration of desertification. The plant has even been listed as being at risk of extinction by at least one source.

The decline of saxaul forests in the arid regions of Mongolia may account for the increasingly harmful sandstorms in recent years, according to researchers B. Suvdansetseg, H. Fukui and R. Tsolmon. Within their study area, the forests of saxaul -- the most important native plant in the region -- had contracted by some 50 percent over 25 years.

DesertUSA Newsletter.-- Each month we send articles on hiking, camping and places to explore. Animal, wildflower reports, plant information and much more. Sign up now (It's Free!)

Cholla cactus represent more than 20 species of the Opuntia genus (Family Cactacea) in the North American deserts. Chollas are the only cactus with papery sheaths covering their spines. These sheaths are often bright and colorful, providing the cactus with its distinctive appearance.

The Saguaro Cactus
Saguaros often begin life in the shelter of a "nurse" tree or shrub which provides a shaded, moister habitat. The largest plants are estimated to be 200 years old and can reach heights of 15 to 50 feet.