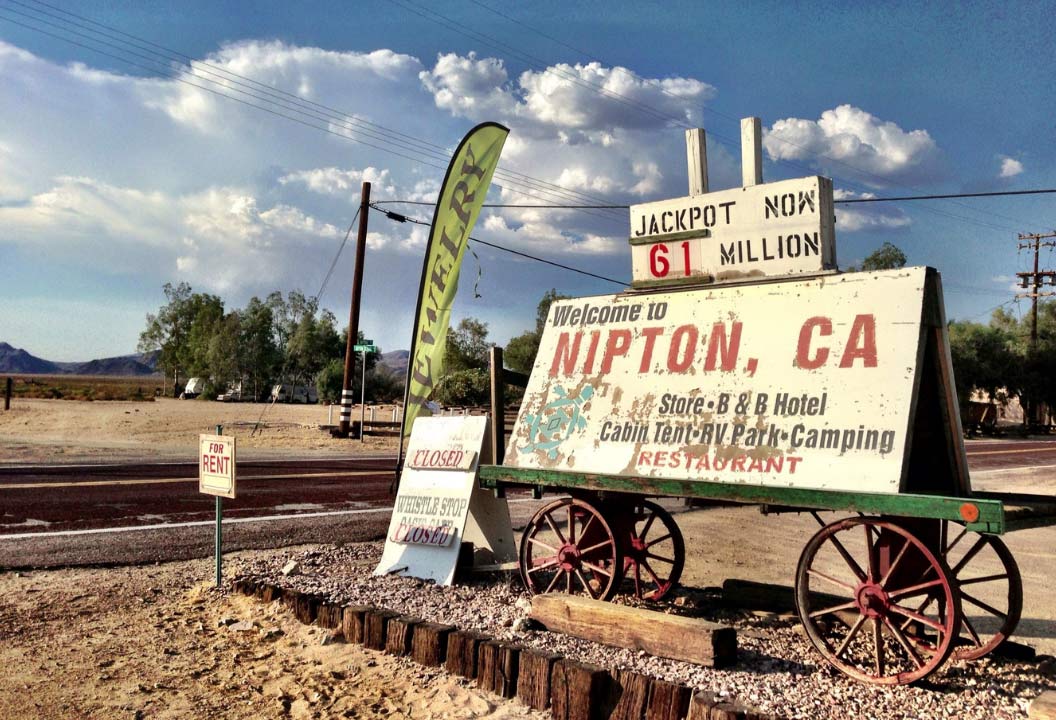 In the nineteenth century, two overland wagon trails crossed on the east slope of Ivanpah Valley. One east-west trail carried people and freight from the Colorado River to the silver mining town of Ivanpah. The other, a north-south trail went from the mining community of Goodsprings to Goffs, a station on the Santa Fe Railroad (the Southern Route). A discovery of gold at the turn of the 20th Century in the Crescent District drew attention to the crossroad which would become the town site and place name of Nipton.

An entrepreneur and gold seeker from western Pennsylvania, S.(Samuel) D. (“Dunc”) Karns, arrived in Ivanpah Valley late in the 19th Century attracted by the boom town in the Vanderbilt Gold District just up the valley from the E-W/N-S crossroad. It is thought that on January 1, 1900, Karns and some associates staked the earliest claim in the Crescent District, to be given the name Nippeno, later to be followed by adjacent claims Susquehana, Cumberland, Northhumberland, Pennsylvania, and Osceola: taken together to be known as the NIPPENO CONSOLIDATED MINE. The mining camp associated with the mine was known as NIPPENO CAMP, which was located nearby the wagon crossroad. There is evidence that the name Nippeno derives from Native American tradition of the western Pennsylvania region.

Nevada Senator William Clark, a Montana copper barren, was determined to connect Salt Lake City to Los Angeles by rail. In 1885 he proposed building the railroad which his company completed in the winter of 1904/1905 which passed immediately by the crossroad and Nippeno Camp.

The San Pedro, Los Angeles and Salt Lake railroad brought new traffic to the little crossroads community. The whistle-stop on the railroad time tables was designated as “Nippeno Camp”. Passengers bringing freight and cattle from the neighboring region traveled to Nippeno Camp as it was the most accessible railhead for transit to the east: Salt Lake City and Chicago; and to the west: Los Angeles.

By 1910 the S.P., L.A., & S.L. line had been merged into Harriman's Union Pacific Railroad System and the name of the crossroads community had been changed to Nipton. A stagecoach line from Searchlight, Nevada was established to carry passengers and freight to Nipton and the railhead. Early records from the 1900 Census indicate an individual named Karns registered as a Mining Engineer in the Vanderbilt District. Post Office records for the period of 1907 – 1909 show an S.D. Karns as the Postmaster in Nipton. Voter records (1908) indicate that Karns was a registered voter in the Vanderbilt Precinct and worked as the storekeeper in Nipton. Obituaries in Pennsylvania papers indicated that Karns died in Nipton in 1909.

Nipton Hotel in the late 1940s

Harry Trehearne, a Cornish miner from England, immigrated to America and was naturalized in Las Vegas in 1913. Settling down in Nipton, he opened a general store and pursued the development of the community, which included restoring the Hotel Nipton and digging the first water well. He was also active in many local mine explorations and developments. Harry met Ella Mae and they married, establishing a family home in Nipton. They filed homestead papers with the Federal Government and on April 10, 1940, President Franklin D. Roosevelt completed the process, signing the homestead, thus transferring the title of the land from the United States to Trehearne. 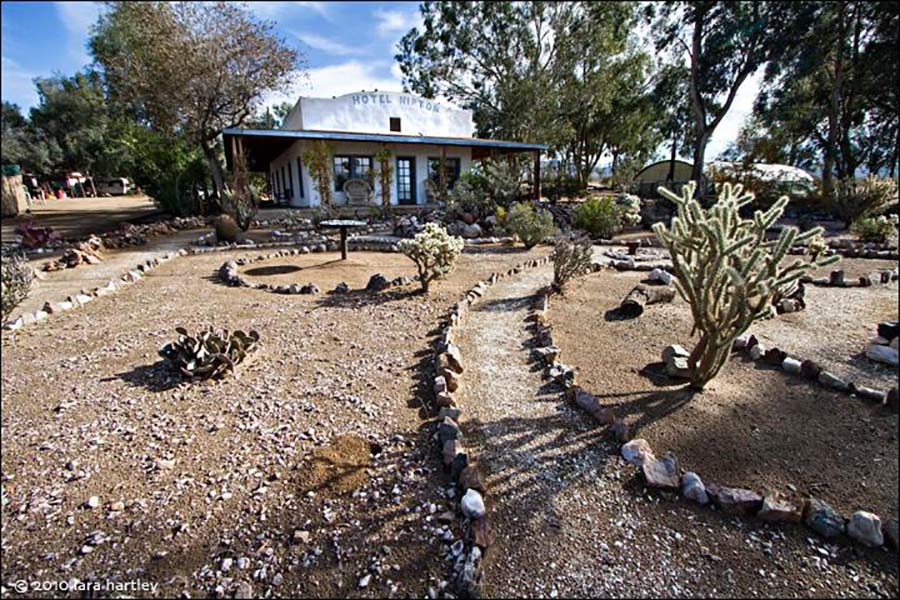 In 1940 while Harry Trehearne was returning to England for a visit, he was aboard the Athenia when it was torpedoed off the English coast. Trehearne survived and returned to Nipton.

On his return, Trehearne continued to develop the community of Nipton. He built a new General Store (now the Nipton Trading Post), the Town Hall and the Nippeno House. Other projects at the emerging town site also continued.

Clara Bow, the famed "IT Girl" of the Hollywood Silent Film era, moved to a cattle ranch about 16 miles from Nipton in the late 20s. Her husband, Rex Bell, drove their cattle overland to Nipton for shipment by rail to the slaughter yards. Clara accompanied the cowboys to Nipton, where she picked up her fan mail from the post office, and visited with her friends Harry and Ella Trehearne. Clara, it is said, preferred Room #3 in the Hotel Nipton for her stays. Today Room #3 is called the Clara Bow Room. Clara and Rex often entertained the Hollywood crowd at Nipton and on their ranch. Trainloads of guests would arrive in Nipton for the overland auto ride to their Walking Box Ranch.

Harry Trehearne passed away in 1949 and Nipton passed into other hands. After a period of neglect, Nipton was purchased by the Gerald Freeman family in 1984. Much of Nipton has been restored since then. The Freeman's first efforts included the restoration and renovation of Hotel Nipton and the promotion of it as a bed and breakfast inn, and the reformation of the general store into the Nipton Trading Post, a gift and convenience store. Nipton Station, a recreational vehicle park, was developed to provide temporary living accommodations for workers in the local gold mines. The owners hoped the town would be seen as a gateway community to Mojave National Preserve. Nipton was intended as a host location for tourism and a hub for art and nature educational workshops. This was a shift from its traditional role in mining, ranching and railroading.

Update 11/20/20 Nipton, California is back on the real estate market for the second time in five years.

Update 08/04/17 American Green, a marijuana-focused technology company and consultancy, has purchased the small town for close to $5 million with plans to turn Nipton into a pot-tourism destination.

Nipton for Sale? abc30.com reported January 22, 2016, "A desert town with a population of six is up for sale....A realtor has been hired to sell the entire town, all 80 acres, its properties and the solar panels that allow Nipton to operate 50 percent off-the-grid. The asking price: $5 million." Read the article here

1900 - Gold is discovered in the Crescent District - New York Mountains near Crescent Peak, Nevada about 5 miles east of a small community at a wagon crossroads in Ivanpah Valley. The apex claim, given the name "Nippeno", is staked on Jan 1, 1900. (Nippeno Patent - U.S. Archives) The crossroads wagon community becomes known as Nippeno Camp, as the place where the miners live. 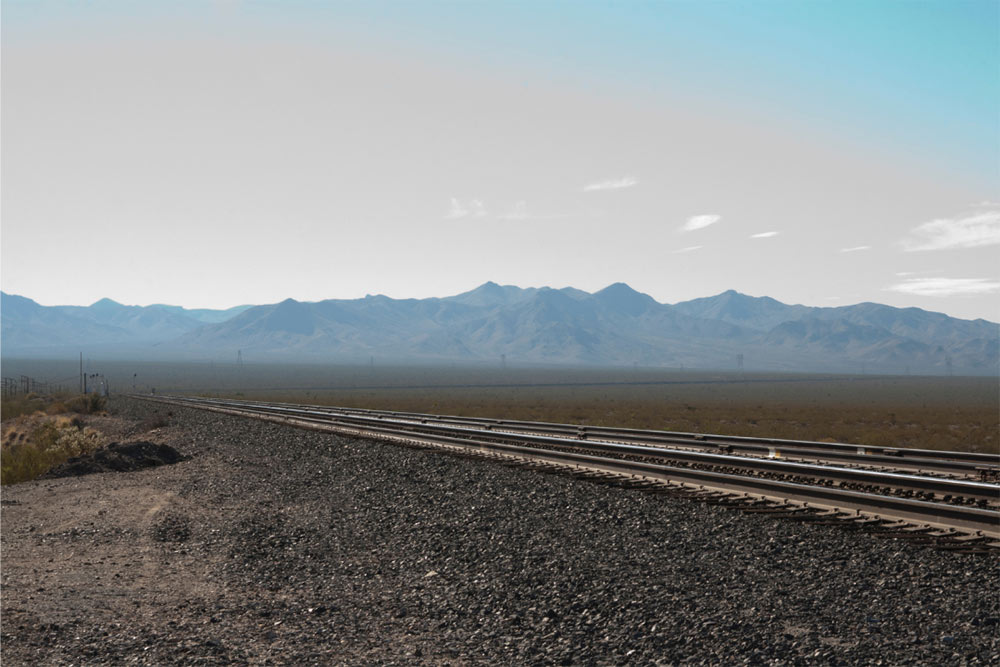 1905 - The first train from Salt Lake City to Los Angeles runs on February 9 with Senator Wm. Clark aboard.

1905 - 1910 - Original construction completed of Hotel Nipton. Mining boom days in Nippeno with active exploration and development in the Crescent District. (Smith-1981) Regular stage travel between Searchlight and Nippeno probably established in this period. Stage travel continues to be reported through 1926. (Hewett - 1956)

1929 - Light Plant constructed at Nipton to provide electricity for the townsite. Equipped with 2 KOHLER 5kW generators.

1930-33 - School House built in Nipton. Made of concrete with galvanized steel roof, Harry Trehearne believed to be instrumental in this construction. Correspondence of the period indicates that Trehearne was the registered "Clerk" of the then established School District. Costs of construction are indicated as $18,000.

1934 - Controversy over School House located on Settlement Claim No. 022952. Residents and voters from the Cima and Kelso precinct of S.B.Co. file protests with the U.S. Land Office regarding the inclusion of the lands underlying the school house within the Settlement Claim. Trehearne deeds school house land (100' by 200') to the Cima School District, Deed dated August 16, 1934.

1937-40 - Under Trehearne direction, original water well dug by hand, in miners' manner of sinking a shaft, to a depth of 550 feet below surface.

1940 - Spring (?) Harry Trehearne travels back to native England. On route, his ship Athenia is torpedoed. Trehearne survives and returns to Nipton. Photo shows H. T. with dislocated shoulder from incident.

1940-43 - Store and Town Hall constructed taking several years due to many interruptions as a consequence of wartime shortages of materials.

1945 - Trehearne constructs concrete block 2 bedroom home (Nippeno House) for his family including Ella, his wife and Roland, his stepson.

1956-1984 Nipton property passes into the stewardship of six various owners.

1984 - Freeman Family (d.b.a. Provident Corporation) takes possession of the Nipton town site under provisions of a lease with option to purchase.

1985-1988 - Gold Mining Boom days in Nipton with active mining and development of nearby Morning Star Mine, Coliseum Mine and Castle Mountain Venture (Hart Mining District). RV Park is activated under the trade name of Nipton Station to provide temporary residence for miners working in nearby mines. Nipton Station is full to capacity of itinerant miners and their families.

1986 - Hotel Nipton, bed and breakfast inn opens for business in May. Nippeno House remodeling is completed in July to serve as primary residence for Gerald Freeman family.

1995 - Planning begins for developing Nipton as tourism and art center.

1998 - Construction of first prototype EcoLodge tented cabin to accommodate visitors to the Mojave Desert recreational resources. This EcoLodge is named The Pioneer.

2000 - Construction completed of modified second prototype EcoLodge to be named The Surveyor. Information obtained regarding S.D Karns circa 1900 arrival, and his activities in establishing Nipton (Nippeno Camp) as a California place name.

2005 - The Kelso Depot restoration completed by the National Park Service and the facility opened to the public as the official Visitor Center for Mojave National Preserve. Nippeno Camp at Nipton now includes 4 EcoLodge tented cabins.

2017 - American Green, a marijuana-focused technology company and consultancy, has purchased the small town for close to $5 million with plans to turn Nipton into a pot-tourism destination. More...

Compiled by Gerald Freeman in Nipton and DesertUSA

A variety of roads offer visitors access to many of the special features of the Preserve. Sand dunes, a historic railroad depot, Mitchell's Caverns, scenic canyons and cindercones are just a few of the resources that can be enjoyed. Some of the roads are signed, others will require a map. Motor vehicles and bicycles must remain on established roads. Driving in washes or off-road is not allowed. All motor vehicles must be street legal.

Hunting is permitted in the Preserve in designated areas and according to federal, state and local regulations. There is no hunting in the safety zones around all recreation sites and in the Granite Mountain Research Natural Area.

The Preserve has about 1,200 miles of road, enough to keep the busiest of desert explorers going for some time. The quality ranges from paved two-lane roads, to maintained dirt roads, to extremely rough 4-wheel drive routes.

A bed and breakfast hotel, Eco-Lodges, and upscale RV sites are available in Nipton, California. A small store with limited food stuffs is located at Cima. The store in Nipton, Nipton Trading Post, has propane, ice, beer wine, many food items, American Indian jewelry, maps and books about the area. There is a café and bar also located in Nipton, the Whistle Stop Oasis. Click here for room information.

Other locations to visit in Mojave Desert