The Moth, the Butterfly and the Skipper
How to Tell Them Apart 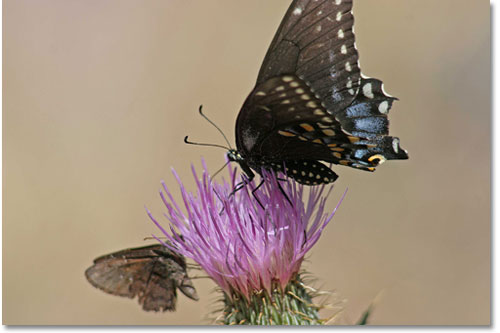 Black swallowtail butterfly (Papilio polyxenes) on bloom of a thistle.
Note the near-vertical position of the wings above the insect's body.

Like all insects, the moth, butterfly and skipper have exoskeletons and jointed limbs, but unlike other insects, the three all have membranous wings covered with pigmented scales, which give their taxonomic order its name, "Lepidoptera," or "scaly wings." The moth, typically dressing in plain colors and patterns and laboring at the night shift, represents the working class of the taxonomic order. The butterfly, adorned in flashy colors and patterns and abroad in the daylight, represents the hoity-toity. The skipper, with characteristics of both the moth and the butterfly, falls into an intermediate stage. Combined, the moths, butterflies and skippers comprise more than two hundred thousand species throughout the world and more than 10,000 in Canada, the United States and northern Mexico. Moth species outnumber the butterfly and skipper species combined by about eight or ten to one.

Black witch moth (Ascalapha Odorata). Note the flattened wings (typical of many moths), which may span six to seven inches. In the folklore of Mexico, the black witch is a harbinger of death.

The moth, when not flying, spreads its wings flat or holds them pitched (like a pitched roof) over its heavy-bodied thorax and abdomen. It has thread- or plume-like antenna with no knobs at the end. While most fall into the "working class," some species do have colorful patterns on their wings and go about their business during the day.

The yucca moth, or Tegeticula yuccasella, is typical in that it features simple colors - white, grayish brown and brown - and it works at its job of pollinating the soap tree yucca, or Yucca elata, from twilight to midnight.

The butterfly, when at rest, holds it wings in an extended upward spread or in a vertical position above the body. It has antenna that terminate in knobs. If many butterflies represent the elite of the Lepidoptera, some of them wear pedestrian brown with little patterning.

The skipper, when not engaged in its darting, erratic flight, typically holds its short wings, much like a butterfly, in a near vertical position above its moth-like body. It may hold its forward and hind wings at slightly different angles. It has antenna that terminate in knobs that often have fine hook-like extensions. Skippers come in a broad range of colors and patterns, sometimes with considerable variation among individuals within a species. 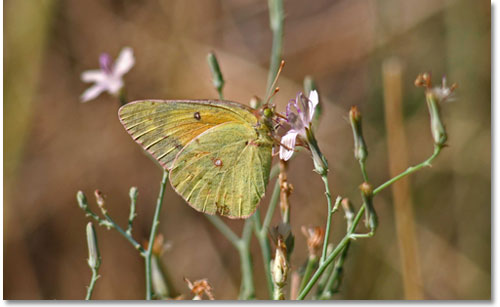 Alfalfa butterfly (Colias eurytheme). Note the typically butterfly vertical position of the wings above the body.

How do I recognize the yucca moth?

Where can I see a yucca moth?

How do I tell the difference between a moth, a butterfly and a skipper?