Anza-Borrego Desert State Park encompasses some of the most diverse desert landscape in the world. It includes elevations from 8,000 feet to below sea level, together with the characteristic plants and animals of these ecological zones.

Most of the dirt roads in the park are recommended for 4-wheel drive vehicles during most of the year, but once in awhile a window of opportunity will open to create road conditions suitable for all types of vehicles.

Reptiles are probably the one animal group visitors most associate with desert habitats. Anza-Borrego Desert State Park protects the richest concentration of lizards and snakes in California. Over 50 different species can be found in Borrego's 600,000 acres. More...

As you begin to explore Anza-Borrego Desert State Park, you will find that it has a rich archeological heritage and that nearly every surface of this arid land yields evidence of past human inhabitants.

Archeologists have found indications of human activity in Anza-Borrego as early as 6000 years ago. However, very little is known about these early people. We do know that their technology did not yet include pottery or the bow and arrow. Instead, they stored their food underground in rock-lined storage cysts, and they hunted with spears.

The Kumeyaay and the Cahuilla

When the first Spanish explorers entered the Anza-Borrego Desert more than 200 years ago, the land was home to the Yuman-speaking Kumeyaay and the Shoshonean-speaking Cahuilla.

Archeologists believe that the Kumeyaay left the Colorado River area and moved into what is now Imperial and San Diego Counties, sometime between 2000 and 1200 years ago. The Kumeyaay, sometimes called the Kamia or the Southern Diegueno, lived along San Diego Bay and inhabited the mountains and the desert to the east.

The Cahuilla, they speculate, migrated out of the Great Basin around 1500 to 1000 years ago to occupy areas from Riverside south across the San Jacinto and Santa Rosa Mountains to the Borrego Valley. While possessing different languages and ancestry, the Kumeyaay and Cahuilla, who both inhabited the Anza-Borrego Desert, shared many similar lifeways as they adapted to this desert environment.

Both were semi-nomadic peoples, spending their winters in the desert lowlands and moving to higher ground (such as the Laguna and Santa Rosa Mountains) from late spring through the acorn and pinenut harvest in the fall.

If you see agave growing nearby, chances are you might run across the remains of a roasting pit, an area of darkened soil approximately 4 meters in diameter, filled with charcoal and fire-broken rock. These pits were used for roasting agave and, very likely, other foods as well.

In many parts of the desert, particularly in the Santa Rosa Mountains, you may see ancient trails crossing the mesas. Along these trails one often encounters rock piles called cairns, which may represent trail markers or shrines where native peoples passing by hundreds of years ago, would toss a rock on the pile to thank the spirits for a safe journey.

Both the Cahuilla and the Kumeyaay manufactured ollas (pots) from local clay and fired them in open fires These pots were used to store nuts, seeds, grains or water and were often cached in rock shelters or under bushes. While most of the whole ollas left by Indians have been illegally collected by treasure hunters, fragments of pots can still be found scattered throughout the desert. These potsherds represent pots that were either dropped in place or perhaps stashed and later broken by the elements or by modern people.

Indian campsites or villages which were occupied, either continuously or seasonally over long periods of time, tend to build up a midden, a grayish-to-blackish soil composed of relatively high amounts of organic matter, charcoal, fire-broken rock and sometimes pottery, chipping debris, stone tools and other artifacts. Look for these midden near water sources and areas protected from the sun and the wind.

A specific type of petroglyph, sometimes called a yoni, is a natural crack in a large boulder which has been enhanced by stone tools to look like a human vulva. Yonis are believed to be associated with female fertility rites.

Cupules look like tiny shallow mortars, approximately two centimeters across, and are found on vertical as well as horizontal rock surfaces. These, too, are believed to have ritual significance. The interpretation of rock art is a very speculative matter, but ethnographic information reveals that some rock art was the domain of the shaman (holy man), created in connection with the puberty rites of boys and girls, with fertility ceremonies, or with weather control.

It is a State Park policy to avoid discussing the locations of any archeological sites except those that have been interpreted for the public. This policy is intended to reduce vandalism of the sites. One of the biggest threats to cultural resources is unauthorized and illegal collecting of artifacts. Through examining artifacts in place, noting their spatial relationship to other artifacts and to various elements of the environment, and combining these data with information gathered from explorers' diaries, Spanish documents, mission records and ethnographies, archeologists can piece together the complex story of these early desert inhabitants.

It is important to understand that every artifact left in place is an integral part of the story that these archeological sites have to tell. When you come across signs of a past culture during your visit to Anza-Borrego, we ask that you leave everything in its place for future archeologists to study and for future park visitors to enjoy. Please remember that removal of archeological resources is illegal under both state and federal law. -- Source: Rae Schwaderer, Park Archeologist

See individual Park sections for information on natural history. Anza-Borrego Desert State Park, because of its size and diversity, it is best described by dividing it into 7 distinct geographic and geologic regions. Each of these regions offers a unique experience to visitors. 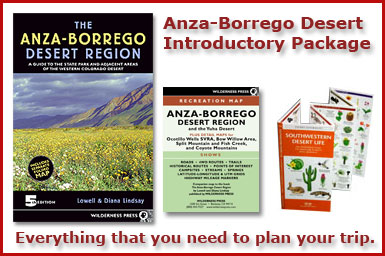