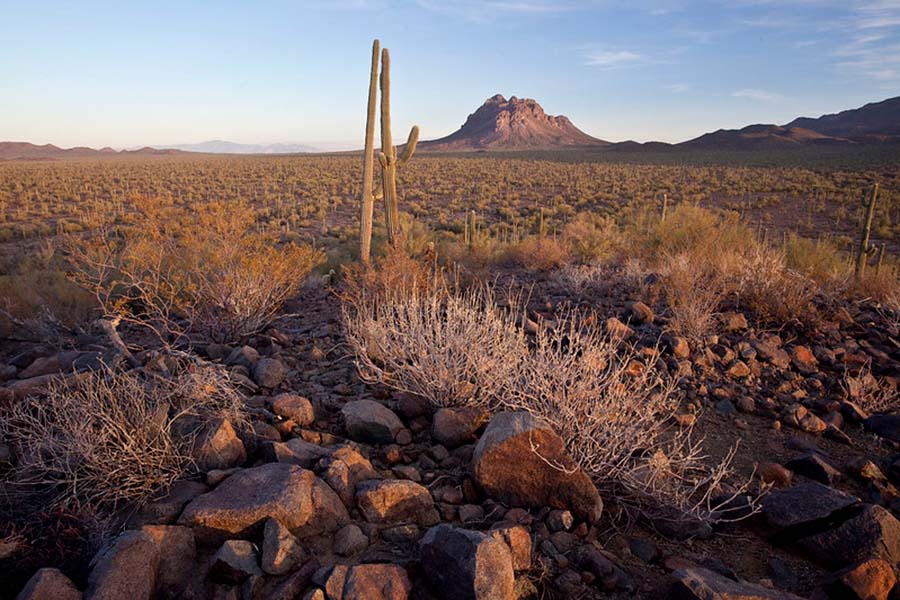 I rounded up my usual traveling partners – friend Klaus and grandson Matthew – to plot our next adventure. We decided to start with the Ironwood Forest National Monument, a 129,000-acre desert wonderland about 25 miles northwest of Tucson, and to end with the Arizona-Sonora Desert Museum, a few miles west of Tucson.

The national monument was established in 2000 with some sense of urgency, created under outgoing President Clinton to counter the threats of development and mining. The area contains the ghost town sites of Sasco and Silverbell and perhaps the finest stands of ironwood trees anywhere. Its Silverbell Mountains are home to a small, remnant herd of desert bighorn sheep.

I told my wife the usual lie: “We won’t be doing anything risky.” Of course, by now she knows better. We began our trip by going west from the Red Rock exit off I-10. The dirt road drive is pretty uneventful, since it passes through idyllic farms and ranches on mostly level ground.

There is, however, one notable exception: the Santa Cruz River, which we would have to cross. It sometimes actually has running water, making it a significant stream for Arizona. At the crossing, we discovered that the river did have water on this occasion. It had split into two streams about a quarter mile apart. Since I’m like a cat when it comes to water contact, we stopped to contemplate our next move. I was about to ask for a volunteer to wade across and check the stream bottom and the water depth when along came a truck with two-wheel drive and low clearance, and it plowed right across the stream with no hesitation. Problem solved.

(This reminded me of the story about the Arizona cowboy visiting a friend in New York City. After traveling all around the big city, the cowboy was asked; “What did you think of the Hudson River?” His reply: “I don’t know. I couldn’t see it. It was full of water the whole time.”)

Driving directly west, we arrived at the ghost site of Sasco, the name being an acronym for Southern Arizona Smelting Company. Still surviving are the old boarding house walls and a short distance further, the actual smelting site. We bumped into a group of paint ball aficionados who were preparing for battle. They were kind enough to allow us first access so we wouldn’t become targets. The boarding house layout provided great views of Picacho Peak and other surrounding mountains. The old smelter building consists of a lower level of chutes, access holes and labyrinth separations. It also has an upper level with a function unknown to us, although we could walk through that part of the structure. We took photos and left so we would not inconvenience the paint ballers.

We discovered next what I think is a great treasure at the national monument: one of the rare, crested saguaro cacti, which are crowned with fan-shaped tops. (They are sometimes called “cristat” saguaros.) The cause of this type of growth is unknown, but thought to be caused by an injury to the growth stem. The plant is not harmed however, continuing to grow and flower - and to develop its unusual, beautiful form. This one coexisted with a mature ironwood tree, which likely protected the crested saguaro when it was young. The cactus is estimated to be about 100 years old and appeared to be healthy. 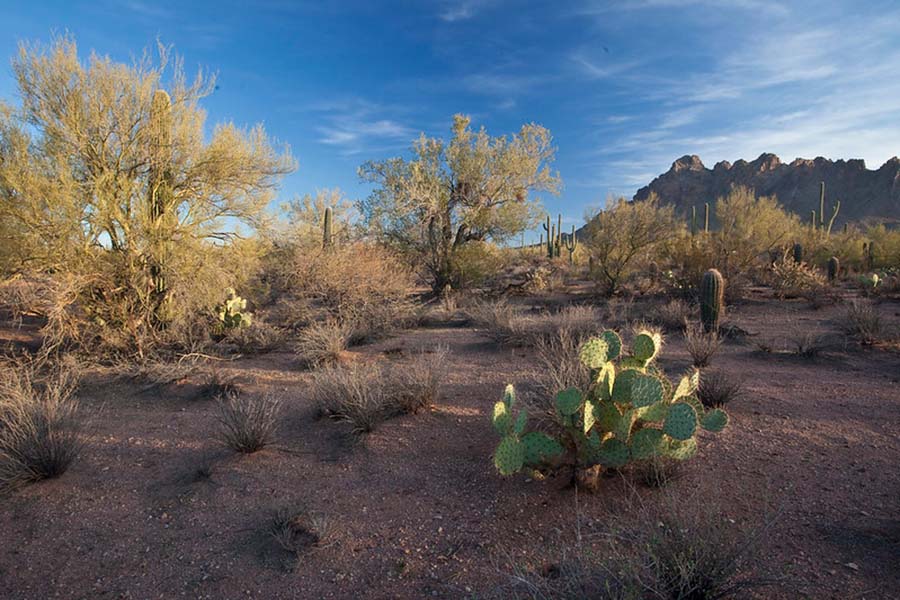 The ironwood, distinctive because of its exceptionally dense wood, is among the largest and longest-lived of all the Sonoran Desert plants. An ironwood may reach 45 feet in height and live for more than 1000 years.

Ragged Top Mountain in the Silverbells

Moving on, we found that the road makes a large curve to the south and then turns back east, to Silverbell. Most of the Silverbell town site has been demolished over the years by modern copper mining operations. Most of the mining in this area has been conducted by the copper industry, which has left yawning open pits and mountainous tailings. We discovered the old Silverbell cemetery, which is mostly undisturbed and unmaintained. I’m told some descendants of the original miners and ranchers are still alive. We stayed away from mine property, entry being forbidden. We encountered a couple of dove hunters who were not having much luck. We found a cow carcass that had been ravaged by desert critters and the dry climate. 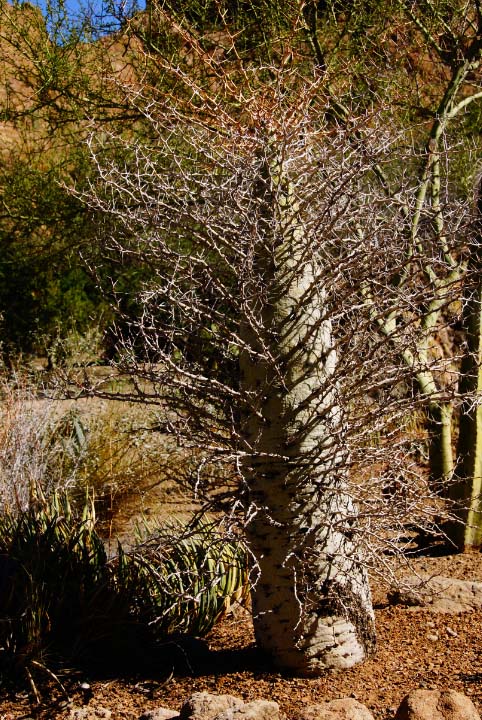 We continued south to end our adventure at the Arizona Sonora Desert Museum. The museum is extraordinary, entirely worthy of a separate trip. Most notable are a mining section, a zoo, a botanical garden and interactive programs. Matthew liked scraping a bone out of a simulated rock grave. We especially enjoyed the mountain lions (which posed for us) and also the Boojum trees. The upside-down carrot-like Boojum trees are very nearly extinct in Arizona and only very few survive in Mexico. I know of only one in the state other than those few in museums.

As our adventure turned out, we did not do anything risky. We could have made the entire drive in a sedan with the only real potential hazard being the water level in the Santa Cruz River. My wife would never believe it.