The ancient people of the Colorado River tell the story of its creation. Kumastamxo, son of the creator of all people, gave them the keys to their survival. He showed them how to cure illness. He gave them bows and arrows. Then, with the tip of his spear he traced a line through the desert. This would be the Colorado, the lifeline of the Desert Southwest.

The Colorado River was a flexing force of nature, undammed, a temperamental river prone to tantrums. On flatlands, it would change course without notice. But with this chaos, it brought fertile soils from the north for planting and created life in an otherwise barren desert. And as a waterway, it offered a route of travel away from the mountains and desert hazards. It challenged any land crossing, however, and with a width of sometimes a mile or more, demanded that travelers take unrealistic chances. So everyone trying to get to California was looking for the same thing -- a place they could cross the Colorado River. 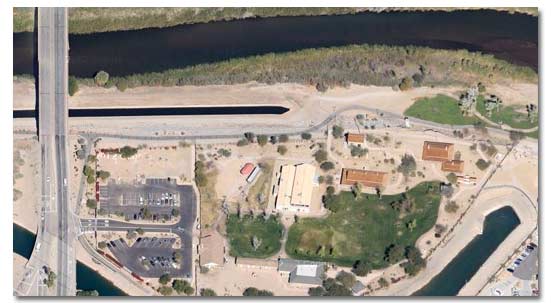 In the northern portion of Arizona Territory, there were a few places to cross, but to get there meant passing through mountain ranges and possible freezing temperatures. Down in the flatter and more temperate south, however, there was a natural crossing where the ornery river briefly passed between two rocky mounds. Indian Hill and Prison Hill narrowed and calmed the river just a few miles south of the confluence of the Gila, at the present location of Yuma, Arizona. The Quechan and Cocopah Indians knew the value of their land, but until the 1500s, after hundreds of years of occupation by native tribes, the desire for this site suddenly became more competitive.

Word about the crossing would soon spread around the world. Soldiers, businessmen, natives and even priests would literally kill to possess it. Captain Hernando de Alarcon came from New Spain to deliver supplies during an expedition looking for the legendary Seven Cities of Gold. Sailing northbound on the Sea of Cortez, he eventually found himself at a rumbling confluence of river and ocean. Not finding the party he was searching for, he switched to rowboats and pushed his way further up the river. Eventually he reached the Gila, and though he did not stay, Alarcon brought back knowledge of a place where it was possible to cross the Colorado River. Over the next 400 years, the tracks of footsteps, horses, wagon wheels, locomotive rails and automobiles would all converge at Yuma Crossing to leave a piece of their history behind.

The Yuma Crossing State Historic Park sits on the bank of the Colorado, where river captains once sailed from the Gulf of California to unload supplies, then kick up their heels in the bustling port of Yuma. The park is the site of the U.S. Army Quartermaster Supply Depot, a supply house for the military posts in the Southwest. Ocean vessels brought supplies around the Baja Peninsula from California to Port Isabel, near the mouth of the Colorado. From there, cargo was loaded onto smaller steamships and brought upstream to Yuma. The depot operated from 1864 until 1883, when the arrival of the railroad made the long steamship route unnecessary.

Many of the original structures from that time are still standing. Made of adobe, essentially mud and plant material, they have survived well in Yuma's dry climate. In fact, since their original construction, the buildings have been used by the Weather Service, the Bureau of Reclamation, the Signal Corps, the Border Survey and the Yuma County Water Users Association as recently as the late 1980s.

Remnants of the steamboat era still exist when looking down on the river. As a transportation hub, the park has artifacts such as stagecoaches and a 1907 locomotive engine, even an antique pair of Native American sandals. The records of the commanding officers offer a unique look into what military life was like in Yuma during the 19th century.

Yuma Crossing State Historic Park tells the history of the Crossing from prehistoric times until the present, set in the backdrop of the old Quartermaster's Depot. The area is also recognized as a key location in the cultural development of western history by the National Endowment for the Arts. Through the eyes of the Native Americans, entrepreneurs, steamboat captains, fortune seekers and the military, it answers the questions of how the early emigrants survived or failed, living in one of the most rugged and isolated places in the world.