Art On The Rocks 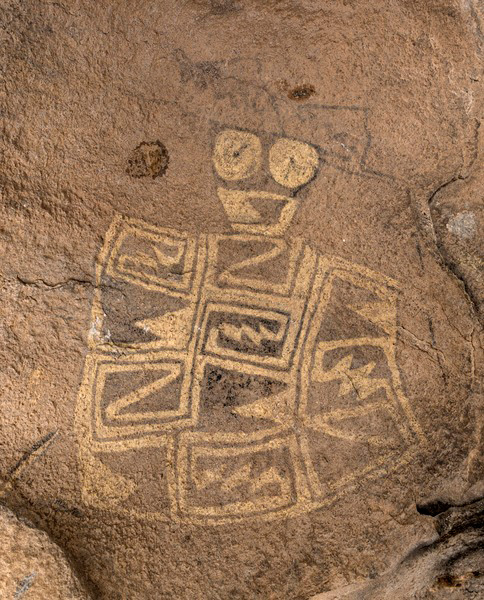 One of more than 200 "mask drawings" in the park, the most in North America.
The pictograph may be viewed, as of the date of this photograph in 2014, as part of ranger-guided tours of the park. Carol M. Highsmith, Public domain, via Wikimedia Commons

I set my handhold and pulled myself onto the top of a house-sized boulder. It lay clustered with several other, similar boulders at the base of a three hundred-foot cliff. They leaned together to form a room-sized cavity. I judged the difficulty of climbing out, then dropped down eight feet into the protected enclosure. When my eyes adjusted from the West Texas sunlight to deep shade, I could see that I was not the first to discover this cozy hideaway. Someone had been here before, and with a pot of paint. But the image wasn’t graffiti. It was an intricate mask painted by an artist hundreds, perhaps more than a thousand, years ago.

One of the oldest and most unusual art galleries in the Southwest lies isolated in the desert thirty miles east of El Paso. It exhibits three thousand five hundred paintings on a medium more durable than canvas, specifically, that of rock. No climate-controlled buildings protect these priceless works, most predating the discovery of the New World. The pictures remain where ancient artists drew them, in the crevices and cliffs of what is now Hueco Tanks State Park & Historic Site. 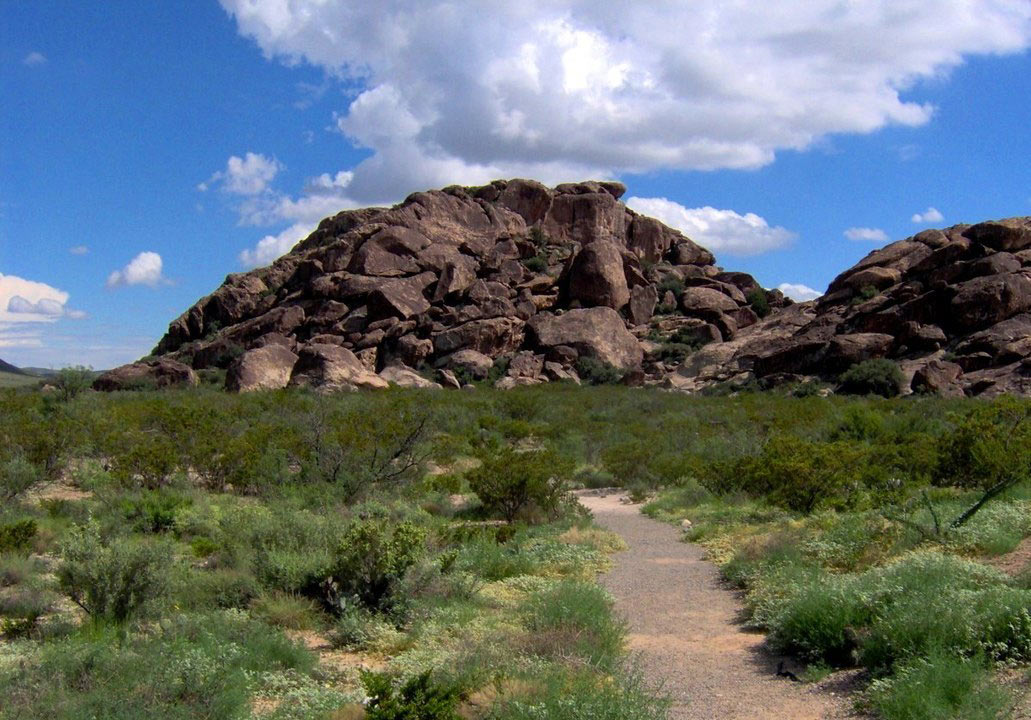 
Surrounded by sand and scrubby vegetation, the lofty outcropping of rock juts up four hundred and fifty feet above the desert floor. The molten rock, or magma, that formed the towering sentinels welled up deep from within the earth some thirty five million years ago but cooled before reaching the surface. Warm seas covered West Texas during this period and deposited thousands of feet of limestone sediments.

Geological forces gradually uplifted the terrain. The seas retreated. Erosion stripped away the overlying limestone. It left the more resistant igneous rock, with natural basins called "huecos" in Spanish, rising above the plains.

As it has done for eons, rain from thunderstorms flows in torrents across the rocks and fills the shallow basins and deep reservoirs. The sun reclaims the water from the exposed depressions, but the larger, sheltered huecos hoard their treasure. One natural cistern holds one hundred and fifty thousand gallons and several others hold more than ten thousand gallons. It's shaded so that no algae grows, the water remains potable throughout the year.

In a region that receives less than eight inches of rain annually, water is the most critical resource. The tall crags with their natural basins, or huecos, support a diversity of life in the desert. Tiny fairy shrimp, tadpole shrimp and clam shrimp, for example, thrive in the small, temporary ponds. In a race against time, they mate and lay drought-resistant eggs before the ponds evaporate. Foxes, coyotes, bobcats and, occasionally, mountain lions, seek out the natural basins. The water, trees, grasses and shelter of the hills attract more than one hundred and seventy species of birds.

A Folsum projectile point discovered at Hueco Tanks indicates that humans shared the rocky oasis with wildlife ten thousand years ago, when the climate was cooler and wetter. These early inhabitants from the period called the "Paleo" hunted bison and other large animals which are now extinct.

Next, nomadic Desert Archaic peoples, with cultural roots reaching back thousand years before Christ, used the rugged hills as a refuge. They lived in rock shelters, hunted small game and harvested wild plants. The oldest surviving paintings – red and yellow zigzag lines and simple figures – date to that period.

By one thousand years ago, the inhabitants of Hueco Tanks had developed a sedentary lifestyle and farmed corn, beans, squash and, perhaps, cotton. Archeologists discovered the remains of a small village of their semi-subterranean pit houses, which they abandoned in the 1400’s. Kachina-like figures (similar to Pueblo masked dancers), painted animals, blanket-like designs and stylized figures comprise most of the pictographs dating from this period. 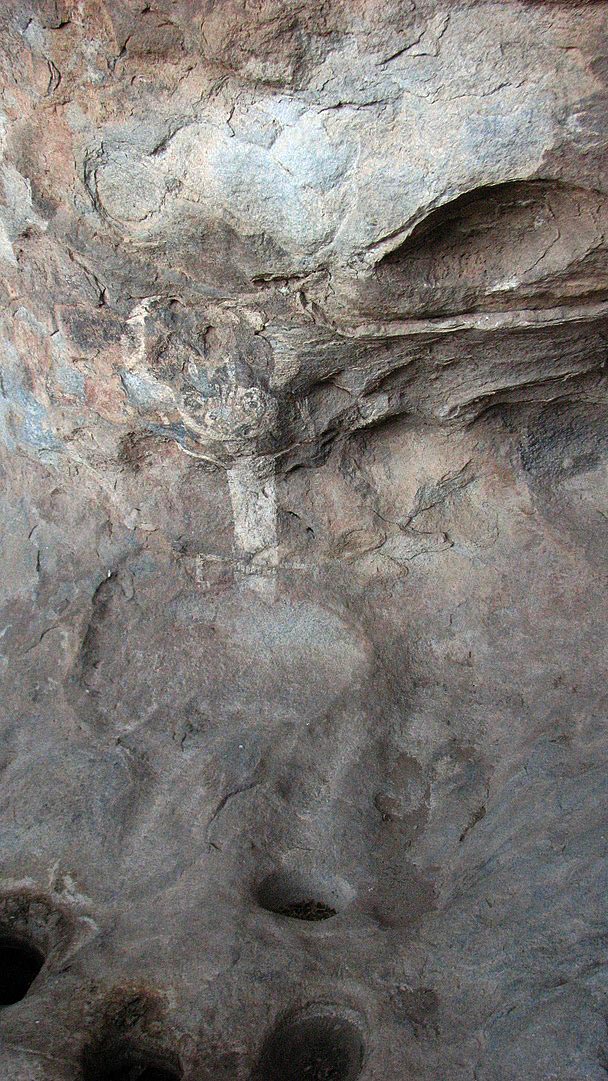 Metates and White Horned Dancer, in the Cave of the White Horned Dancer, Hueco Tanks, El Paso County. The White Horned Dancer is not the only pictograph in this cave, which also has an antelope, a snake-like feathery glyph, and others. The images show an array of art techniques, indicating that multiple cultures have inhabited this cave over multiple epochs.
By Ancheta Wis at English Wikipedia, CC BY 3.0, https://commons.wikimedia.org/w/index.php?curid=29185812

The Mescalero Apaches moved into the area in the 1700’s and visited the tanks regularly. The hills offered both water and a hideout during trips to raid Anglo and Mexican settlements. Many Apache and other Indian paintings from historic times portray Mexican and Anglos and often tell stories and depict action between humans and animals.

Discovering the hidden rock art makes exploring the open parts of the park a real treasure hunt. You can also join one of hikes led by a ranger into restricted areas of the park. The rangers discuss what the symbols are thought to mean. "Many of the pictographs are the Puebloan Style," a ranger tells our group. "Masks and other symbols similar to the ones here appear in prehistoric kivas and on the pottery in the pueblos [of northern New Mexico]. Apaches entered the area in the 1700’s and painted the pictures of horses and soldiers."

The masks in particular impress archeologists because of the style, sophistication and numbers. More- than ninety have been recorded so far, by far the largest known collection of painted rock art masks for any location in the region. The artists painted some masks in combinations of colors, drawing from red, green, yellow, orange, blue, white or black pigments. They painted other masks with only one color.

The artists used yucca stem brushes to paint with washes of mineral pigments on the rocks, and they often incorporated abstract patterns and figures of animals into the mask designs. Some masks have earrings, definite facial expressions and elaborate headgear, including conical hats, horns and plumes. Alone and hidden away in hard-to-reach places, the masks might indicate the spot had a religious significance, perhaps as a shrine.

A figure similar to southern Mexico’s ancient rain god, Tlaloc, with goggle eyes and a body covered with abstract designs, appears in a few locations. This is no surprise, considering the importance of water in the desert.

In recent years, rock art in the Southwest may have taken on added meaning to modern people, thanks to Le Van Martineau, author of The Rocks Begin to Speak. By comparing the symbols to Indian sign language and using cryptography techniques developed by the military, Martineau has deciphered many rock art paintings. He considers rock art a complex form of picture writing comparable to the hieroglyphics developed by the Egyptians.

While at Hueco Tanks, Martineau interpreted one panel of drawings which he believed told a detailed story of how Mexican militia trapped a band of Kiowa raiders in a nearby cave. Without food or water, the Indians became desperate. They finally managed to escape, although at least one warrior was killed and at least one was seriously wounded. The incident, which occurred in 1839, was described by Kiowa informants for white historians. Their accounts mirror what appears to be the story depicted on the rock. Perhaps in the future, the pictographs will be considered historical documents and Hueco Tanks will be viewed as a library as well as an art gallery.

After climbing out of the natural enclosure I had chanced upon, I returned to camp and sketched the mask I had discovered. At the visitors center, I paged through a notebook of all the masks but find nothing close. I showed my drawing to the ranger. He studied the picture. "It could easily be something new," he said. "There are probably still hundreds of paintings in the park waiting to be discovered."

For additional information, contact:
Texas Parks and Wildlife Hueco Tanks State Historical Park
6900 Hueco Tanks Rd. #1
El Paso, Texas 79938
Guided tour: You must book tours a minimum of one week in advance by calling (915) 849-6684.
Self-guided visit: We issue permits for 70 people to access the North Mountain area each day. To make sure you get in, reserve permits up to 90 days before your visit by calling (512) 389-8911.
Note: the park has a limit on the number people that can be in the park at one time.
For camping reservations, call (512) 389-8911