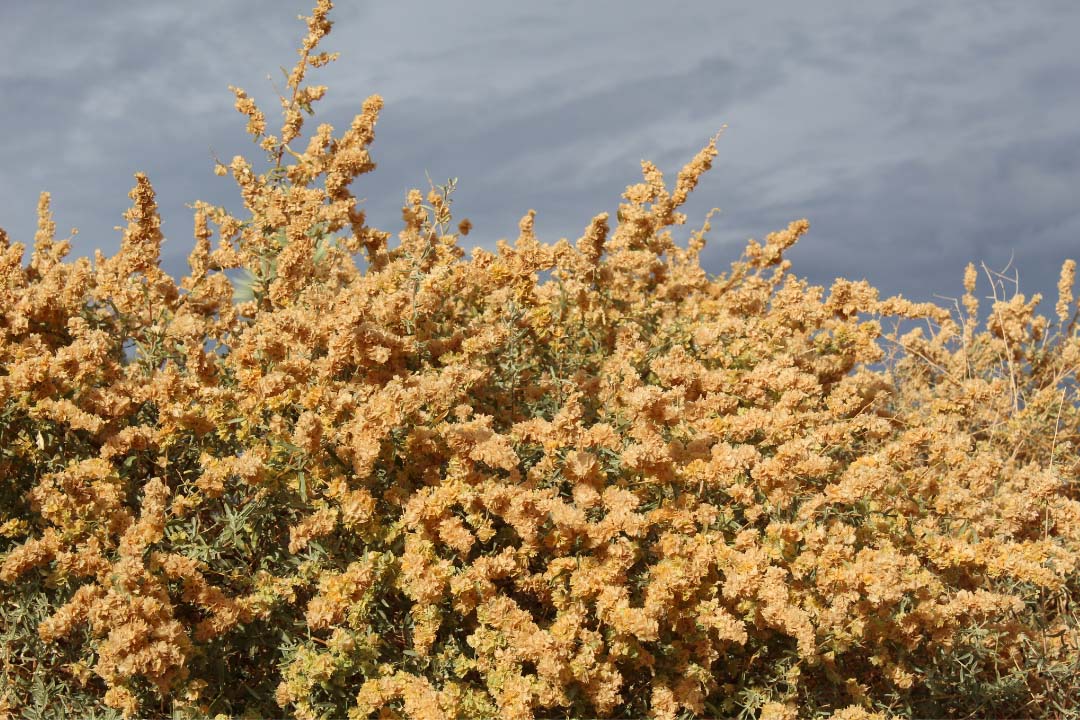 Four-wing saltbush gets its common name from the seed, which has four paperlike wings that project from the seed at right angles. "Saltbush" refers to the alkaline soil habitats in which the plant grows. The common name was suggested by Frederick Coville, famous for introducing blueberries into cultivation. The leaves also have a salty flavor which may contribute to the name. The scientific name Atriplex (AH-tri-plex) is from the Latin word for herbs and shrubs, while the species name canescens (kah-NES-enz) means grayish-white or hoary, a reference to the color of the leaves. The family name Chenopodiaceae is derived from the Greek words khen meaning "goose" and pous meaning "foot." Certain members of this plant family have leaves that are shaped like a goose's foot. The plant is also known as wingscale, cenizo and chico.

Four-wing saltbush are shrubs that grow an average of two to three feet tall although they may reach eight to fifteen feet in height. They have many branches; some twigs are spiny. The young stems and leaves are covered with minute white scales called scurf, which helps protect the plant against water loss. Long linear-shaped leaves are three eighths to one and one half inches long, grow either singly or in small clusters from alternate nodes, and are covered with small scales. These plants are dioecious—the Latin word for "two homes." Male and female flowers are found on separate plants (mostly). The tiny yellow male flowers grow in tiny globular clusters called glomerules. Five sepals are fused into a small cup, from which the five stamens arise. Female flowers grow in open, elongated clusters two to sixteen inches long, arising from the sides of the stem. The seeds, called utricles, have four large, membranous fringed wings that arise at right angles to the seed. The flowers bloom from mid-spring to mid-summer. Some years, plants may be cloaked with seeds.

These shrubs are found in blackbrush, cold desert shrub, pinyon-juniper and salt desert shrub habitats, mostly in alkaline soils, but also in gravelly washes or sandy soils. In areas of drifting sands, the stems will continue to grow above the newly formed dunes.

Four-wings grow from California, northwest to Washington, east to North Dakota and Kansas, and south to Mexico. Occurs from two thousand five hundred to eight thousand feet in elevation. The four-winged saltbush is the most widely distributed saltbush.

Native Americans of the Southwest harvested the leaves and seeds of the plant for food. Seeds were cooked like oatmeal, and the leaves were either eaten raw or cooked. Sometimes the ashes of the plant were used as a leavening ingredient for breads or were used in making a lye to soften the hulls of corn. However the seeds were prepared, they represented a good source of niacin. The ground-up seeds were mixed with sugar and water for a drink called pinole.

The Zuni crushed handfuls of the male blossoms and mixed with a little water to create a soap for washing or treating ant bites. This suggests that the plant contains saponins, soaplike compounds. The Navajo made a yellow dye from an infusion of the twigs and leaves.

Four-wing saltbush is an important browse plant for wildlife. Deer, pronghorn and rabbits feed on the leaves, while some birds and small mammals feed on the seeds. Small rodents use the shrub’s protective form for excavating their burrows.

Many members of the goosefoot family are considered weeds: Russian thistle, pigweed, arrowweed and kochia, but cultivated members of the family include spinach, Swiss chard and sugar beets.

Like many plants that can tolerate salty soils, the four-wing saltbush has tiny bladders located on the leaf surface that store salts, which eventually erupt and release salt onto the leaf surface. Some researchers believe that the salts in the leaf's tissues act like antifreeze, enabling the plant to continue to photosynthesize longer in winter.

In some instances, the four-winged saltbush may be monoecious—a Latin word meaning "one home." Both male and female flowers are found on one plant, but the plants may switch their floral arrangements from monoecious to dioecious and back again! Four-wing saltbush is known to hybridize with twelve other Atriplex species.

The large papery wings of the seed facilitate dispersion by the wind. The wind blows the seeds away from the mother plant, and they tumble along to a different location. A fungus forms a beneficial association with the roots of the seedlings at germination. The fungus provides access to essential nutrients that the plant's roots may not be able to take up on their own. This gives the seedling a competitive advantage over other seedlings.


We have an online wildflower field guide that is designed to help you identify desert wildflowers by color, scientific name, region and common name. The pictures are sized to work on the iPod, iPhone, iPad and similar devices. With your iPod or phone you will easily be able to identify wildflowers while in the desert. Links for downloads are on the bottom of the Wildflower Field Guide page.

Photo tips: Most digital point-and-shoot cameras have a macro function - usually symbolized by the icon of a little flower. When you turn on that function, you allow your camera to get closer to the subject, looking into a flower for example. Or getting up close and personal with a bug. More on desert photography.

Mojave Desert Wildflowers - This book is the standard by which all other wildflower books are measured. The author, Jon Mark Stewart, has combined super photography with concise information. This book has an entire color page for each wildflower covered, with a discussion of the wildflower. 210 pages with 200 color photos. More...