A Food Chain, or Food Web is how biologists describe the series of living organisms that energy passes through as it powers the lives of plants and animals. A food chain always begins with plants, called producers. It always ends with animals, called consumers.

Energy and the Food Chain

Solar energy is combined by plants with water and carbon dioxide to create glucose. Glucose is a form of sugar used by animals for reproduction and growth.

The First Link in the Food Chain - Producers [Plants]

Plants, or producers, capture the energy from the sun and are the first link in the food chain.

Energy is essential for the growth of all organisms, the processes of life and the actions of animals. Energy enters the food chain through plants, as they capture and change the energy of the sun.

Energy creates the power to make something to happen, like breathing, or movement. Energy is used by plants to grow and to reproduce. It's used by animals too, to grow, to reproduce and to move. People use energy too, just as animals do.

2) Kinetic energy is energy that's being spent to cause something to happen, like growth, reproduction or movement.

Solar energy is combined by plants with water and carbon dioxide to create glucose. This is called photosynthesis, a word that means “gathering of light.” Almost every plant from the smallest to the largest uses photosynthesis.(Some parasitic plants such as Indian pipe, Monotropa uniflora, and the snow plant, Sarcodes sanguinea, do not use photosynthesis, getting their energy instead from their host plant.) 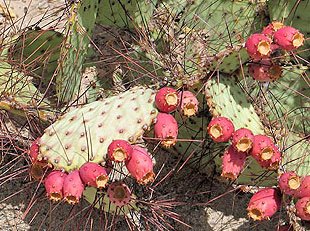 A prickly pear cactus has a waxy coating that slows evaporation and saves water.

Energy begins to flow through the food chain when plants are eaten by animals, like insects, reptiles, birds, or mammals. Animals that eat only plants are called herbivores. They are the second link in the food chain.

A bee, feeding on plant nectar, is an example of the second link in the food chain.

A ladybug eating aphids is an example of the third link in the food chain.

Diamondback rattlesnakes eat small mammals and reptiles. They can be third or fourth links in the food chain.

Energy moves through the final link in the food chain with microscopic animals called decomposers, which feed on any remaining dead plant and animal tissue and animal waste. Over time, these tiny fungi and bacteria break down decaying organic matter, converting it into carbon dioxide and water. The freed carbon dioxide and water are then available again for plants to use in the process of photosynthesis. This makes it possible for the cycle of energy to move through the living community all over again.

Energy follows constantly changing routes throughout food chains. Communities of plants and animals may be made up of tens of thousands of species that change with the seasons and the years. This process forms an interlocking web of food chains.

Video on how the Desert Food Chain Works


Note: My thanks to Leslie Bergloff, a former teacher and the present New Mexico Farm & Ranch Heritage Museum Education Coordinator for her helpful comments in preparing this article.