Canyon de Chelly was designated a national monument in 1931 to protect and preserve the numerous archeological resources long known to exist here on the canyon rims, walls and bottomlands. Thanks to an arid climate and the shelter of numerous caves and overhangs, an unusual variety of delicate artifacts and organic remains has been preserved.

These sites exhibit more than 1500 years of human occupation containing early pithouses, cliff dwellings, and more contemporary Navajo hogans established long after the original inhabitants -- the Anasazi -- abandoned the area around 1200 A.D. There are also numerous petroglyphs and rock drawings throughout the lengths of Canyon de Chelly.

Canyon de Chelly today is an 84,000-acre archeological sanctuary administered jointly by the National Park Service and the Navajo Nation. At Canyon de Chelly, archeologists can observe the transition of prehistoric Anasazi to historic Pueblo, as well as Navajo history and modern life. There are still many unexcavated sites here available for future study.

Spanish
Exactly when Europeans first became aware of this area is uncertain, but a 1776 Spanish map includes the location of Canyon de Chelly. By 1800, Spanish troops had entered the region, not to collect antiquities, but to subjugate the Navajo Indians. Evidence of this event is seen on pictographs within the canyon.

Americans
Later, American military explorations and war campaigns against the Navajo sometimes included men with scientific training assigned to gather information. In 1849, Lieutenant James H. Simpson of the Corps of Topographical Engineers, recorded several of the archeological sites in the canyon, including one he called Casa Blanca (White House) because of a white-plastered room in its upper portion. He also noted similarities between the construction methods used in this region and those used in the ruined pueblos of Chaco Canyon only 75 miles to the east, which he had previously visited.

Ever since then, Canyon de Chelly has been subjected to a disparate procession of exploitations and explorations, from individual and institutional pot-hunting raids, to legitimate, extensive archeological survey and excavation projects.

By 1900, looting ruins was a common practice, and Canyon de Chelly became a magnet for collectors and plunderers. Charles Day and his son Sam built a trading post at Chinle in 1902. The U.S. Department of Interior appointed the elder Day caretaker of Canyon de Chelly and Canyon del Muerto in 1903, which offered an excellent opportunity to excavate and remove artifacts from many sites.

In 1906, the Days sold a large collection to the Brooklyn Museum of Natural History, where it has occasionally been exhibited since. That same year the American Antiquities Act was passed, finally providing statutory protection for Southwest antiquities and nurturing the infant scientific discipline of responsible archeology.

Vegetation within Canyon de Chelly is almost entirely within the Transition Zone, ranging from desert grassland in the area of Chinle Wash, to evergreen forest on the Defiance Plateau and Chuska Range.

Native plants of the canyon include Yucca, Opuntia Cactus and Grama Grass, in addition to selected small stands of Utah Juniper and Mexican Pine. As the archeological records shows, Yucca fiber was important to prehistoric peoples for making cords, sandals and baskets. Pinyon nuts were a staple fall and winter food for cliff dwellers and modern Navajo alike.

Contemporary animals of the canyon include Coyote, Kit Fox, Mountain Lion, Black Bear, Bobcat, Raccoon, Badger, Jackrabbit and Cottontail, as well as squirrels chipmunks and gophers. Evidence of most of these creatures is present in archeological sites dating to the beginning of the Christian era.

Canyon de Chelly National Monument encompasses a long, three-armed canyon on the northwest slope of the Defiance Uplift. The canyon ends in the west where the de Chelly sandstone plunges under the surface just east of Chinle, Arizona.

The de Chelly sandstone was laid down as sediments during the Permian Period (230 to 205 million years ago). De Chelly sandstone is unusual because it is not horizontally deposited, but is of a type called crossbedded sandstone -- containing many depositional surfaces, highly inclined to the horizontal, and composed of many steeply dipping wedges. Such a deep layer of cross stratification is typical of windblown dune deposits.

The canyons were later carved by erosion from running streams -- Tsaile and Whiskey creeks join to form Chinle Wash, producing the awesome cliffs and exposing the sandstone to a depth of 800 feet in some places. The spectacular vertical walls make access to the canyon bottom difficult, which has provided ideal protection for both ancient and modern Native Americans for more than two centuries. 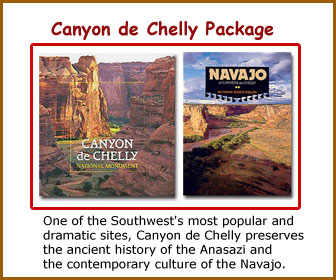