Thing to Do - Climate/Maps - Overview -Nearby

Saguaro West, also known as the Tucson Mountain District, encompasses a wide variety of Sonoran Desert life against the backdrop of the rugged Tucson Mountains, rising as high as 5,000 feet above sea level. In Saguaro West, lowland communities of desert scrub -- where the Saguaro appears in exceptionally fine stands -- and desert grasslands occur.

Saguaro East, also called Rincon Mountain District, encompasses an aging saguaro forest at the foot of the majestic Rincon Mountains, as well as an exceptional variety of other desert plant communities. The park is open daily.

In the Signal Hill Picnic Area of Tucson West, petroglyphs attest to the fact that the prehistoric Hohokam of the Tucson Basin lived and hunted in the region. Unlike their Hohokam neighbors to the north near Phoenix, the cultures of the Tucson Basin used floodwater farming, growing their crops close to stream banks.

The Papago and Tohono O'odham of the region continue to harvest Saguaro fruit in the area,as did their ancestors, to make jam, syrup and ceremonial wine.

Hispanic, Mexican, and Anglo settler sporadically arrived in the Tucson Basin and from the 1600s on, but in the mid-1800s, overgrazing of grasslands, mining for copper and large-scale clearing of land for homes destroyed the habitat of many desert plants and animals. Subsequent flooding and erosion killed many native species and allowed scrub to take over. With the designation of the Monument and elimination of grazing, these habitats have begun to restore themselves, but urbanization of Tucson remains a threat to this wilderness.

But the park's most prominent feature is the boundless variety of unique and majestic Saguaro cactus, which grows nowhere in the world except the Sonoran Desert. The Tucson Basin provides ideal conditions for sustaining dense stands of Saguaro.

The Saguaro has been described as the monarch of the Sonoran Desert, as a prickly horror, as the supreme symbol of the American Southwest, and as a plant with personality. It is renowned for the variety of odd, all-too-human shapes it assumes, shapes that inspire wild and fanciful imaginings. Like all cacti, the Saguaro grows extremely slowly. The largest ones are up to 40 feet tall and more than 150 years old.

Since 1933 this extraordinary giant cactus has been protected within Saguaro National Monument. Preserved along with it are many of the other members of the Sonoran Desert community -- the other cacti, the desert trees and shrubs, and the animals. In lushness and variety of life, the Sonoran Desert far surpasses all other North American deserts. And yet, paradoxically, it is one of the hottest and driest regions on the continent.

Tucson East lies at the foot of the Rincon Mountains, part of a large-3-humped metamorphic core complex. The granite dome of these mountains is surfaced by a metamorphic shell of Tertiary age. Gneiss, schist and quartz wind together in this unit of the park from that time when the outer portion of the granite core was melted.

The turbulent geology of the entire Tucson Basin is especially apparent in Tucson West, where the sharp, jagged Tucson Mountains are the result of millennia of volcanism, sedimentation, faulting, uplift, and erosion. The tops of the Tucson Mountains are covered with a welded volcanic tuff. 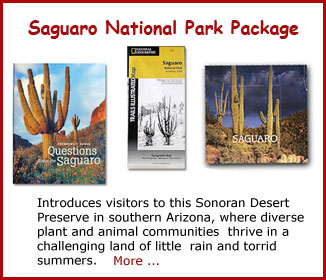 Thing to Do - Climate/Maps - Overview - Nearby