Water Resources in the Southwest 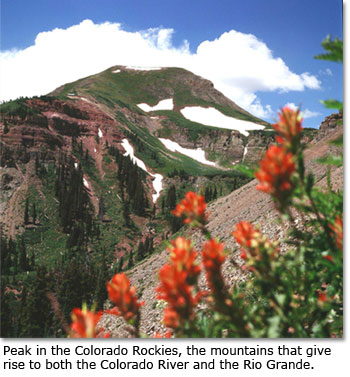 The drought of 2014 to 2017, which affected much of the desert Southwest, led to fallen water tables, diminished wetlands, dwindled stream flows and lakes with severely contracted borders.

Though the state of drought was officially lifted in California April 2, 2017 by Govenor Brown, he also issued Executive Order B-37-16, "Making Water Conservation a California Way of Life." This order prohibits wasteful water use permanently, a wise course for a region so impacted by drought. 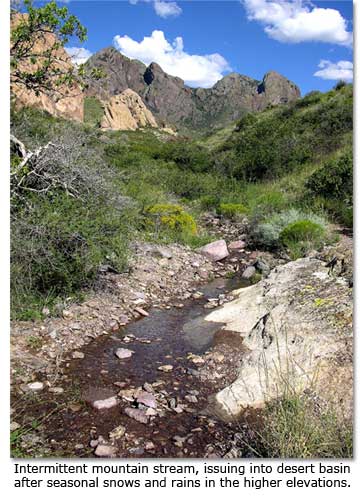 Severe droughts have occurred in the Southwest more than a dozen times during the past eight centuries, according to the U.S. Geological Survey. Federal, state and local government agencies have broadened efforts to reassess the region's water resources and consumption, identify and gauge potential problems, and develop innovative new management and technical solutions.

Assessing our usable ground and surface water resources can be notoriously difficult. Aquifers occur in widely scattered basin locations and at variable depths across the Southwest. Their waters vary in quality and accessibility. Their recharge processes and rates defy ready understanding. Stream flows and lake levels rise and fall largely in response to the amount and timing of snow and rain in the higher elevations, the onset of snow-melting temperatures in the spring, the locations and timing of the typically intense but scattered rainstorms of the Southwest, and the changeable needs for water drawn from ground or from surface resources. The resources, which largely define our lives in the Southwest, raise major challenges for water managers and technical experts.

From the eastern escarpments of the Southern Plains westward across the Chihuahuan, Sonoran and Mojave Deserts, ground water resources – or aquifers, or bolsons – reside within the sedimentary layers that fill the thinly vegetated basins between the mountain ranges. Originally, as the USGS said in its Internet site, Science for a Changing World, "Desert Basins of the Southwest," the ground water became accessible for human consumption when it issued from an aquifer as a spring or a seep, forming a stream or a wetland. Later, shallow ground water became available through hand-dug wells or through low-capacity drilled wells. More recently, the deeper ground water has been tapped by "high-capacity large-diameter drilled wells with turbine pumps…" 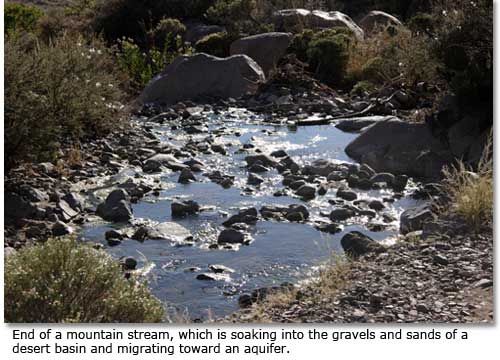 Most water flowing into a typical Southwest aquifer originates primarily as rainfall and snowmelt. Most of it flows from higher – and wetter – elevations through subsurface structural fractures or through surface streambeds into the margins of the basins. It seeps through the sedimentary layers – gravels, sands, silts and clays – to collect in the aquifers, sometimes moving at a rate of no more than several dozen feet in the course of an entire year. Gradually, it saturates the minute spaces, or "pores," between the grains of sedimentary layers below the water table. While sedimentary layers may approach two miles in depth in some of our Southwest basins, the most accessible and highest quality water trapped within the layers typically lies within the upper few thousand feet. Eventually, sometimes after tens of thousands of years in an aquifer, water may reemerge as a spring, join with a neighboring aquifer, seep into wetlands or marshes, or bring nourishment to desert plants.

Over time, even in the dry Southwest, large volumes of water may accumulate in a single aquifer. "For example," said the USGS, "in a basin in which the upper 1,000 feet of saturated sediments contain 15 percent removable water and having an average width and length of 15 miles and 25 miles respectively, the volume of water is 36 million acre-feet. [An acre-foot – a volume of water that would cover an acre of land to a foot in depth – equals about 326,000 gallons.] That volume of water [36 million acre-feet], if it could be practically pumped, would amount to a 2,000-year supply for a population of 100,000 having a per capita water use of 160 gallons per day." Collectively, prodigious volumes of water have accumulated in the Southwest's numerous aquifers.

Click here to read more about the Southwest's groundwater.