Montezuma's Castle is well known among tourists who exit Interstate 17 on their way north to the Grand Canyon. But few tourists visiting Montezuma's Castle are familiar with the park's counterpart -- Montezuma Well. The "well" was first brought to the general public's attention by Richard J. Hinton in his Handbook to Arizona, published in 1878.

The earliest reported non-native visitor to the area was the Spaniard Antonio de Espejo on his 1583 expedition. In his journal he describes an abandoned pueblo with a ditch running from a nearby pond. It is thought this was Montezuma's Castle and Well.

Cliff dwellings along the rim of Montezuma Well. NPS photo

Early settlers to the area concluded that the stately cliff dwelling belonged to the Aztec emperor Montezuma. Actually, the "castle" was home to the Sinagua -- not the Aztecs -- and was deserted nearly a century before Montezuma was born. Montezuma never lived in the castle named after him nor did he drink from the well's waters.

Montezuma Well is a sinkhole, a collapsed underground limestone cavern filled with water. More than a million gallons of water a day flow continuously, providing a lush, verdant oasis in the midst of surrounding desert grassland. Montezuma Well is 368 feet across and 55 feet deep; it sits at an elevation of 3,618 feet.

Locating the source of the well's water has researchers baffled. Tests using gas and dye have been performed, but so far, no connection has been established between the well's water and any other water source in the area. For trivia lovers, in May 1948, the U.S. Park Service used scuba equipment for the first time ever, to explore Montezuma Well.

The well is a unique ecosystem with several plants and animals found nowhere else on earth. There are leeches, amphipods, water scorpions and turtles that live in this closed ecosystem. This remarkable habitat is perhaps due to the receiving and the discharging of large quantities of warm water (76° F) that enters through underground springs, keeping the environment within the well very stable.

Due to the high concentration of dissolved carbon dioxide, 600 times higher than most natural aquatic environments -- it affords unique conditions for scientific studies of plant and animal interactions not found anywhere else. This rich supply of dissolved CO2, hence lack of oxygen, has precluded many aquatic animals from living in these waters, especially fish.

During the winter, the well is a stopover for various waterfowl. It's not uncommon to see American wigeons, coots, mallards, ruddy ducks, cinnamon teal, gadwalls, and even an occasional Canada goose.

The well empties into Beaver Creek, a trickle during drought years and a torrent during wet years. These unpredictable weather conditions may have contributed to the appearance and disappearance of two distinct desert cultures, the Hohokam and the Sinagua. Both irrigated their crops with the well's waters. Oddly, Sinagua is a Spanish word that means "without water."

Native peoples started living in the region about 2000 years ago. The Verde River and Beaver Creek -- two principle waterways in the Verde Valley -- ebb and flow as the seasons change. So it was with native peoples. They arrived, lived and cultivated, then after several hundred years seemingly vanished overnight. Why? Archaeologists speculate that drought, exhausted soil, disease, or wars with marauding bands may have contributed to their disappearance. Whatever the reason, they left their dwellings in the same condition as they had inhabited them.

It is easy to imagine what it was like for these early inhabitants hundreds of years ago, because the National Park Service has done an excellent job of preserving its original look and feel. We can peer into the past and get a sense of what life was like a thousand years ago.

Archaeologists suspect that the first permanent settlers in the valley were the Hohokam, a Pima word for "all used up." These resourceful farmers arrived in the area around 600 AD and lived in one-room houses made of poles, sticks and mud. These specialized structures are not found among other prehistoric Indians of the southwest. They irrigated their crops of corn, beans and squash from cracks in limestone rocks which carried water from Beaver Creek and the sinkhole we call Montezuma Well. Around 1070 AD some of them left the valley.

A typical Hohokam pithouse is on display and was constructed approximately 1100 AD. The decidedly different Sinaguan dwellings here vary in size from large pueblos of 55 rooms (Montezuma's Castle) down to one-room dwellings. 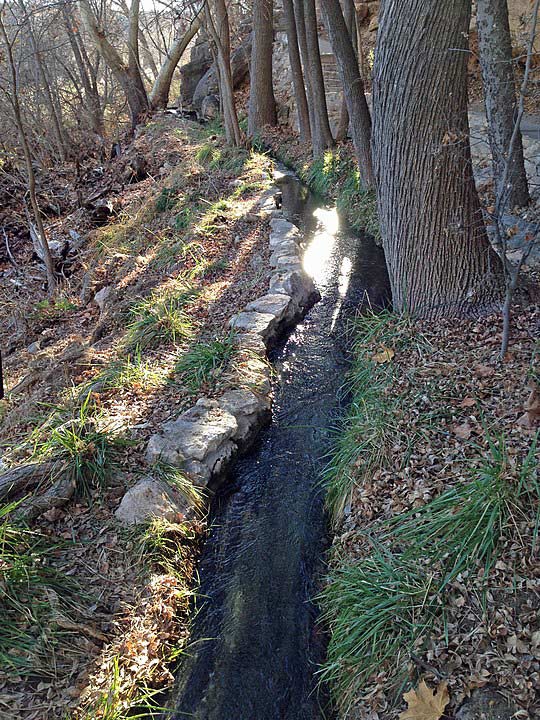 Montezuma Well canal. This part of the canal has been used since antiquity, though it has been rebuilt many times.
By Fredlyfish4 - Own work, CC BY-SA 3.0, https://commons.wikimedia.org/w/index.php?curid=30205967

The Sinagua were peaceful village dwellers. They are believed to have arrived in the valley about 900 AD, and the well supported a community of over 200 Sinagua until 1400 AD. Visitors to the site can still see traces of ancient lime encrusted irrigation ditches from past farming activity. One classic example is seen in the visitors picnic area.

The Sinagua lived in open areas and were primarily farmers. They augmented their diet by hunting and gathering. The Verde Valley supplied them with more than the basics. There was abundant water, fertile bottom lands and ample game -- including deer, antelope, rabbit, bear, muskrat, turtle and duck -- to complement a diet that depended on corn.

The Sinagua were also skilled craftsmen. They formed stone tools such as axes, knives, hammers, and manos and metates for grinding corn. They also crafted bone into awls and needles, wove beautiful garments of cotton, and fabricated ornaments out of sea shells, turquoise, and local stone -- argillite -- for personal adornment.

The last known native peoples to inhabit the Montezuma Well area were the Western Apache. Two small caves at the well show signs of Apache occupation, sometime after 1800.

Montezuma Well is a detached unit of Montezuma Castle National Monument located approximately 11 miles to the south. Take Exit 293 from Interstate 17 and drive four miles. There is a one-third mile self-guided loop trail to the rim of the sinkhole and other trails to the lake. These trails are not recommended for wheelchair use. A lush, shaded picnic area is also located at the well. The park advises visitors to bring their own water, "Access to drinking water is far removed from the trail at Montezuma Well. Please be sure to bring plenty of water especially during the summer months. Visitors should always carry at least 1 liter of water (about 4 cups) per person."

Montezuma Castle and Well were established on December 8, 1906 as a National Monument. They were purchased on April 4, 1947, by the National Park Service, which has maintained them since that date.