Prehistoric: Prior to written history; in this case, prior to the arrival of the Spanish chroniclers in the Southwest. This term is now favored over the pejorative pre-Columbian (before Columbus), which would indicate a slighty different time frame.

During the past century, investigators have been solving one of the great mysteries of the North American continent: Who built the spectacular, prehistoric* cliff dwellings and other ancient structures scattered throughout the American Southwest?

The key to this mystery, curiously enough, involves farming, and how this simple activity fosters the growth of civilization. We now know that agriculture first evolved in the world's harsh, hot, arid deserts, then spread to more temperate climates -- not the other way around, as one might expect. All civilizations first took root in the deserts of the world, including the deserts of the American Southwest.

A century ago, few would believe that ancestors of the American Indians could be responsible for the magnificent structures of the Desert Southwest. Today, after a century of fieldwork in archeology, the best evidence suggests that ancient farmers built these great civilizations and were the grandparents of the present-day, Native American Pueblo people as well.

We know that, although farming was introduced into the southwestern deserts as early 4000 years ago, hunting and gathering remained an important means of acquiring food until about 500 BC, when the agricultural revolution

flourished with the regular cultivation of corn, beans and squash. The evolution of corn (maize) itself was a critical element in this process. As with everywhere else in the world, this led to a sedentary lifestyle, the adoption of cooperative, organized social structures and, in turn, to the formation of urban settlements including, in this case, spectacular cliff dwellings.

The prehistoric peoples of the Four Corners region shared common archaic roots, but different adaptations to regional variations in environment, climate and resources, together with different levels of Mesoamerican influence, resulted in formation of the three primary cultures known today as the Southwest Tradition: the Mogollon, the Hohokam and the Anasazi.Other, possibly related, prehistoric cultures interspersed in this region, including the Sinagua, Salado and Hakataya.

The Southwest's arid desert climate has been very effective in preserving many of the cities, towns and cultural remains of these prehistoric peoples. Tree ring dating has provided very accurate dates from 500 BC to about 1500 AD. There are 28 federal areas -- existing or proposed -- in Arizona, Utah, Colorado and New Mexico designed to protect and display this treasury of spectacular artifacts. Thousands of other archeological sites are under the protection of state and local entities throughout the Four Corners region.

How did we find out when the earliest man arrived? Click here

THE NATIVE AMERICAN PEOPLES OF OUR WESTERN DESERTS

The Salado The Salado are believed to have been a group of wayfaring Anasazi who experienced moderate Mogollon influence.
900 A.D. -- 1450 A.D


Note: This chronology is meant to furnish no more than a general idea of the time of existence of several of the better known Native American peoples of the southwestern U. S. and northern Mexico. While some times, archaeologists can speak with confidence about cultures and dates, more often, the development of chronologies for the cultures of the region is comparable to assembling three-dimensional jig saw puzzles from pieces which often mixed, jumbled, broken and missing. Widespread cultures evolved in different directions at different rates. External cultural influences had different degrees of impact on different cultures over time. Definitions of different cultures mean different things to different archaeologists. Cultural boundaries are elusive. Cultural chronology is a moving target.

The Mogollon | The Hohokam | The Anasazi
The Sinagua | The Salado 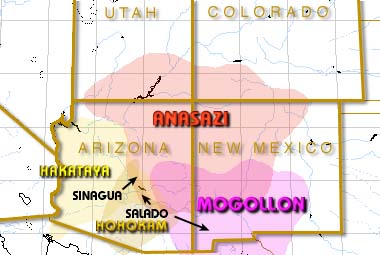